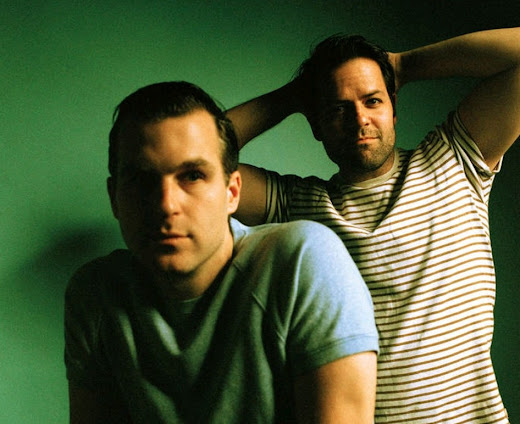 Jade Hairpins quietly released a 12-inch/digital single on Merge Records back in October 2018 consisting of two 7+ minute-long tracks, "Mother Man" & "Gracefully." Discogs list their Genre/Style as Electronic, Rock, Pop, Synth-Pop, and Indie Rock and Jade Hairpins themselves label their genre as "Alternative" on Bandcamp. I'm, personally, reminded a bit of the bleeps and blips of The Bravery, The Cure, Four Tet, LCD Soundsystem, and New Order. Seemingly, out of nowhere, Monday afternoon, Merge Records (@mergerecords) mysteriously Tweeted, "~ t o m o r r o w ~," along with a 9-second video and a glowing Jade Hairpins logo. As promised, the following day, Tuesday, February 4, 2020, @mergerecords Tweeted, "Hhhhhaayyyyyeeeeelllllloooo! Back in 2018, Jade Hairpins emerged mysteriously like a pair of cranes from a tall grove, shared their immediately danceable debut 12-inch single, "Mother Man" B/W "Gracefully," and just as quickly, receded back into the shade." It was followed up by yet another Tweet, which read, "... turns out, Jade Hairpins is the brainchild of Jonah Falco & Mike Haliechuk of @F*CKEDUP infamy. Together, they will present the debut live performances of Jade Hairpins this month in The United Kingdom!"


It has since been revealed within a Merge Records press release that the clues were, in fact, there all along: Tankcrimes released F*CKED UP's 2018 "High Rise" 7-inch ahead of Dose Your Dreams, backed by the B-side, "Tower On Time," which was credited to Jade Hairpins. Plus, if you were to comb back through the unsung lyrics for Dose Your Dreams' "Accelerate," you'll find the line, "her hair was pinned by jade." I'll say this much, it definitely doesn't sound anything even remotely similar to F*CKED UP, but Jade Hairpins, indeed, rock in their own way; you can tell Jonah & Mike are having fun flexing their non-Punk/Hardcore abilities, as a "side-band" is intended to do! It appears as though F*CKED UP frontman Damian Abraham, much like the rest of the world, knew absolutely nothing about Jonah Falco & Mike Haliechuk's involvement in Jade Hairpins, as made apparent by a string of recent Tweets. In celebration of their very public "coming out" as Jade Hairpins, Falco & Haliechuk will be embarking on a February 2020 UK Tour from 2/14-23 with openers Nation Unrest, Basic D*cks & High Vis. Jade Hairpins' 2018 debut, "Mother Man" B/W "Gracefully" is still available in both physical and digital formats through Merge Records.


"So, Mike & Jonah have a new band that I know nothing about! Check it out... as I will be doing, too! Yo, it just hit me: Mike & Jonah are kinda handsome, huh? No wonder people always ask... me... if I'm the drummer... UPDATE: It does not sound like Ruination or Scare Tactic. UPDATE #2: I dig it! It sounds like a record Mike would have made fun of me for buying at #RicsCollectables (RIP) back when were were in our 20's. Go see them on tour and tell Jonah I [say,] "hello," BUT NOT MIKE! J/K say, "hello" to Mike. Also, if you are a wrestling fan, please, talk to him as much as you can about UK Pro-Wrestling! @InsaneChampWres, @ThisIs_Progress, @ProWrestlingEVE, #WorldOfSport: He loves it all! (He's kinda shy, so you may have to work on him to open up about his passion.)" 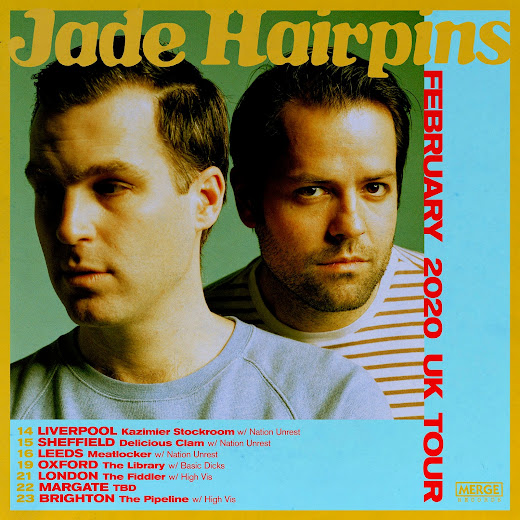