Members of One Step Closer, Strength for A Reason & Worn Release Vicious Existence EP As Choice to Make (Flatspot Records) 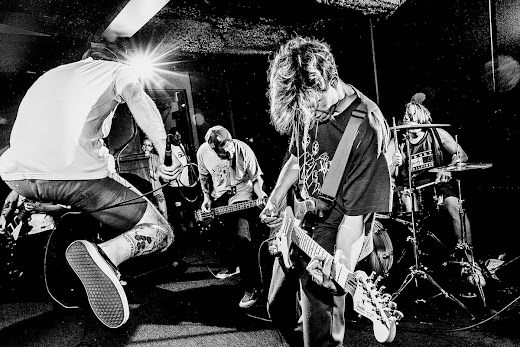 Choice to Make is a Hardcore band from the ever-growing Wilkes-Barre/Scranton scene, which consists of WORN, One Step Closer, Cold World, Final Descent, Heart Out, Frostbite, True Identity, and more. Choice to Make is made up of members of One Step Closer, Strength for A Reason & WORN; consisting of vocalist Nate, guitarist Caleb, second guitarist Ryan, bassist T.K. and drummer Adam. Nate, Caleb, Ryan, T.K. & Adam previously released a self-titled demo in 2018 on 12Forty Records and a Promo 2019 EP (boasting a Dracula cover!) through Street of Hate fan'zine. Now, they're returned with a new EP entitled Vicious Existence through Baltimore-based Flatspot Records. We recently received a press release from a firm managing Flatspot Records, which readily compares Choice to Make's sound across the EP to "early Biohazard, late 80's Agnostic Front, and Underdog." It does have a bit of an underlying Thrash Metal vibe, comparable to early Anthrax, Testament, and even Metallica when they were still actively covering The Misfits.


"In a scene riddled with fashion-first "Punk" upstarts and breakdown fetishists, Choice to Make delivers a vital dose of Hardcore that is equally confrontational and groovy with roots buried evenly the classics of Hardcore and the modern landmarks that have shaped the genre's development over the past two decades," said press release continues. Little else is know about the band, but much like many of their Wilkes-Barre/Scranton Hardcore scene peers, Choice to Make's Vicious Existence EP is undoubtedly a stone cold stomper! Two pre-release singles, "Disconnect" & "June" were premiered at NO ECHO & CVLT NATION, respectively, and yesterday, Brooklyn Vegan hosted an exclusive full album stream. Choice to Make's next scheduled tour date is: 03/20 - Wilkes Barre, PA at Karl Hall (Record Release Show) with Death Threat, Mindforce, HANGMAN, Victory Garden & The Answer. Choice to Make's Vicious Existence EP is out now on Flatspot Records.