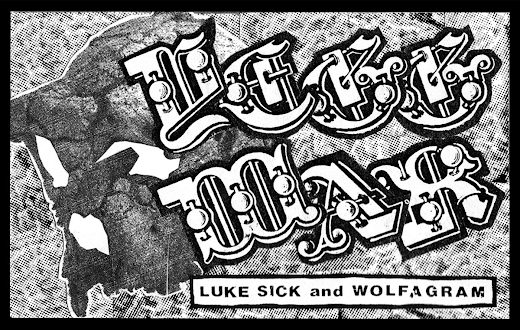 "Luke Sick is, also, working with Toronto beat-maker Andrew Nolan AKA WOLFAGRAM (Intensive Care, Column of Heaven) for a full-length tape release through IRON LUNG Records. The working title is: Yegg War..." read a blurb in the June 2019 installment of 36CrazyFists. 36CF is a digital/emailed 'zine run by SPAZZ's Dan Lactose AKA DJ Eons One. In addition to SPAZZ, Lactose has recorded and released music with Superbad, Funeral Shock, DANK GOBLINS, Deny The Cross, Grand Invincible/Collab, Underbucket, and CCCRRCCSSLLRRKKRRSSS, as well as a gaggle of other bands and runs his own label imprint, Tinted Windows Record Co. A few of the aforementioned groups have been with Megakut Records & Gurp City's own Luke Sick AKA Clell Miller & J. Luke Oakson. Earlier this morning, some additional details and release specifics concerning Yegg War have been properly announced to the masses: LUKE SICK & WOLFAGRAM's Yegg War project will be released on cassette and digital album on Friday, March 13, 2020.


According to IRON LUNG's Bandcamp page, Yegg War boasts beats by WOLFAGRAM, raps by Luke Sick, cuts & scratches from DJ Raw, cover art designed by Dan Lactose, and layout by Damien "IHAA" Miller. Additionally, Yegg War was fully produced, mixed, and mastered by newcomer WOLFAGRAM and was recorded over the summer of 2019. Let's just be completely honest here, with that cast of characters, Yegg War is gonna be nothing short of fantastic! Along with all that information, IRON LUNG Records has let loose the first proper single from LUKE SICK & WOLFAGRAM's Yegg War, simply entitled "650." It's a 3-minute slice of dusty, vinyl crackle-filled old school Boom-Bap/Hip-Hop, which has been described as "a little drugged, a little thugged, and criminally smooth." Yegg War cassettes (CS) are limited to 200 pro-dubbed high-bias cassettes in a classic J-card and clear/clear Norelco box. Both cassette and digital copies of LUKE SICK & WOLFAGRAM's Yegg War are currently available for pre-order directly from IRON LUNG Records.