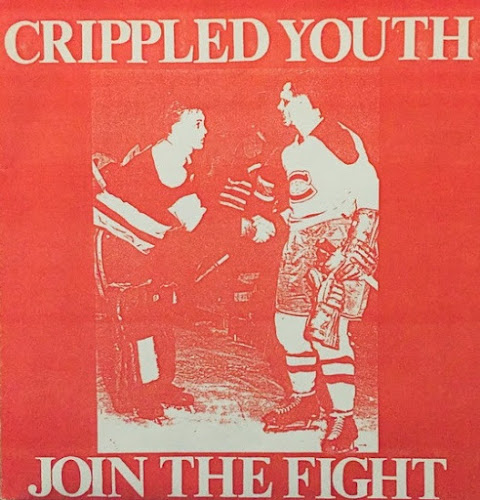 This week's inaugural band is Crippled Youth, which seems to have been a very short-lived band and later, morphed into BOLD. Unfortunately, we didn't get a Response back from anyone in Crippled Youth/BOLD... but Revelation Records' owner and co-founder Jordan Cooper was kind enough to send us a couple pertinent REVHQ FUN FACT installments concerning both hockey-themed Punk/Hardcore and Crippled Youth's iconic 1986 7-inch, Join The Fight. While it isn't exactly "Puck" Rock, it's been stressed to us, by numerous people, that this 7-inch EP/cover was very important to the sub-genre, as well as the genres as a whole. You can learn more about Crippled Youth, Youth Crew Hardcore, and the so-called "Jock Punk" look at Rolling Stone. Special shout-outs are due to Dan Lactose, Dave "Zamboni" Schneider from THE ZAMBONIS, "Captain" Jeff Kaplan from Two Man Advantage, Jordan Cooper, Adam Lentz & David "Igby" Sattanni at Revelation Records, Christian Wagner at Pirates Press Records, Dave "Sausage" Walling from The Boils/Six Feet Under Records, and John Bachman, who helped coordinate this fine mess! Enj-Oi! our latest column, Guts of The Ice - An Exploration of "Puck" Rock/Hockey-core, and stay safe out on the ice, my friends! 💀🏒⛸️

The photo was taken by Roger St. Jean after the 1952 Stanley Cup Semi-Finals with The Bruins & The Canadiens. During the seventh game at The Montreal Forum, Maurice "The Rocket" Richard of The Canadiens was bleeding from a concussion suffered earlier in the game, when he returned in the Third Period to score the winning goal. In that play, he skated end-to-end, weaving through The Bruins players, out in front of the net, and put the puck behind startled [Bruins] goaltender "Sugar" Jim Henry. After the game, Henry shook hands with Richard in what became one of the most famous sports images of all time.

We asked Crippled Youth bassist Tim Brooks about it and this is what he had to say: "as for the hockey player image, my father is a huge hockey fan and sports memorabilia collector. He has a 2' x 3' print of the [picture] hanging on the wall in his home office. Matt, Drew & I liked the idea of these rivals coming together at the end of a brutal game and shaking hands." Check out the Crippled Youth cover and original image here. 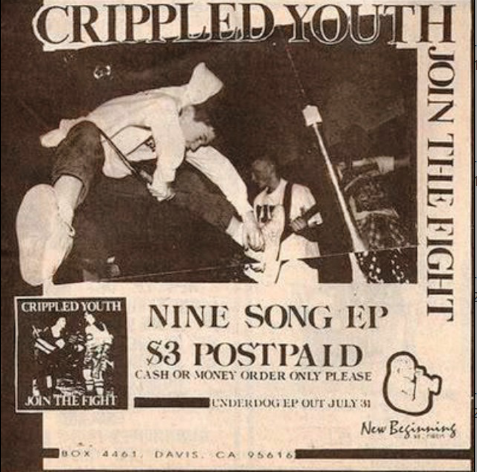