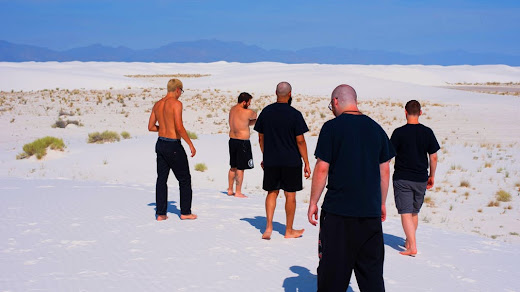 TYPECASTE is a "Long Boston" (Long Island/Boston)-based 90's Metalcore-leaning Punk/Hardcore band. As of February 2020, TYPECASTE is signed to Baltimore imprint, Flatspot Records, and consists of frontman Dylan Carlo and additional members, Sean, Joey, Ray & Marazzo—yes, it's nearly impossible to find their last names online! Following a self-titled 2017 DEMO EP and critically-acclaimed creature of habit EP (2018) TYPECASTE have returned with their third consecutive EP entitled BETWEEN LIFE. Late last month, world-renown Heavy Metal magazine, KERRANG! ran an exclusive premiere of pummeling BETWEEN LIFE EP track, "Traverse," and now, The Hard Times & Pure Noise Records' HARD NOISE has run their own "ALBUM PREMIERE" of the full 4-track EP. Although, it clocks in at less than 12 minutes total, BETWEEN LIFE really is a skull-crusher, honestly, more so indebted to Metal/Metalcore than Punk/Hardcore.


You can instantly tell Dylan Carlo, Sean, Joey, Ray & Marazzo really give it all they've got and by the final note of closer "Under The Wreath," have sincerely left it all on the table. When asked by HARD NOISE interviewer Fred Pessaro how BETWEEN LIFE differed from TYPECASTE's previously released EP's, Carlo responded, "[for] this EP, we wanted to push things even further. Just show progression in the band's creativity to help shape our own. I know Sean has [spoken] about wanting to create our own "world," like, how he feels other bands do." Dylan Carlo continued, "I agree with him and love the idea of creating something that is ourselves. Lyrically, I wanted to become a better writer and I hope we all improved! I feel like we all pushed ourselves to do the best we could. I'm proud of this release." Carlo, additionally, explained to HARD NOISE that TYPECASTE always knew "Under The Wreath" was going to be the EP closer "because it's a big song."


"It is, probably, the most progressive or different TYPECASTE song..." I would have to strongly agree with frontman Dylan Carlo, as their BETWEEN LIFE EP is great as a whole, but listen after listen, "Under The Wreath" really leaves a lasting impression. TYPECASTE will soon be embarking on a North American Tour with like-minded skull-crushers, Sanction, SeeYouSpaceCowboy & Vamachara from 2/15-3/21/20. Oddly enough, members of TYPECASTE are, also, part of Rain of Salvation, along with select players from SeeYouSpaceCowboy, Adrenaline, and other Long Island/Delaware/Connecticut area bruisers. Earlier this week, Rain of Salvation self-released their latest single, "The Sound of Salvation," on Bandcamp for just $1.00 or more. TYPECASTE's BETWEEN LIFE EP will see a wide release tomorrow, Friday, February 7, 2020 on Flatspot Records.