Cheech & Chong Present: "The Miracle of Christmas" (Groovy Sounds of '71) 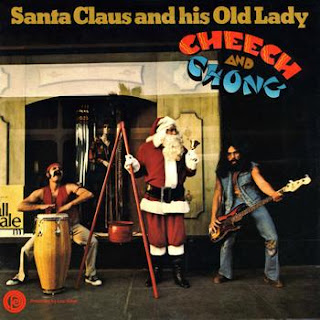 The true beauty of Christmas is that everyone has their own unique way of celebrating it: traditions, customs, festivities, and what have you. Cheech & Chong even went as far as to record their own very "special" interpretation on this pre-recorded song/stand-up routine, "Santa Claus & His Old Lady." The Ode 7" single's B-side, "Dave" was later included on the comedy duo's aptly-titled debut album, Cheech & Chong (1971). Their eventual 1978 feature film Up In Smoke and it's companion soundtrack were later met with great fan-fare. Cheech & Chong followed it up with a gaggle of mind-altering content. For all intensive purposes, I've included a sample excerpt from "Santa Claus" down below. Merry Christmas, Happy Hanukkah and... "A Festivus for the rest of us!"

"Once upon a time, about, hmmm, 5 years ago, there was this groovy dude and has name was Santa Claus, y'know? And he used to live over in The Projects with his old lady, and they had a pretty good thing together because his old lady was really fine, and she could cook and all that stuff like that, y'know. Like, she made da best brownies in town, man! They used to live next door to me [with all these midgets], y'know... until they got kicked out, man. Santa Claus used ta have this really charp chort, man, y'know? It was lower to da ground, had twice-pipes, candy-apple red, and button top. Oooo, clean!"