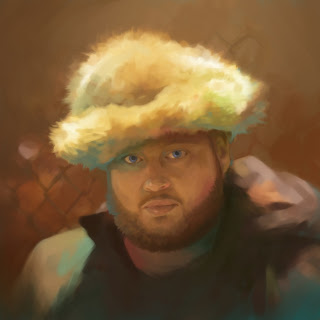 Action Bronson is without a doubt the most raw, captivating character to emerge from the music scene this year. You know what? - He very well may be the most interesting artist in Hip-Hop music within the last 5-10 years! A college and culinary school dropout, Bronson sounds like Ghostface Killah & Raekwon mashed together and thrown on top of Jazzy MF DOOM beats. All too recently, Action Bronson was a high-class Pro Chef. But he gave it all up (fame & fortune) for The Love of Hip-Hop; Although, still cooks as much as humanly possible in his free time while on tour. I must admit, I've been sleeping on this dude for the majority of 2011. Yet fear no more!: I just downloaded nearly 1/2 of Action Bronson's [back]catalog earlier this fine evening.


Action Bronson's most recent contribution to the vast, prosperous "goldmine" that is The Internet just so happens to be FADER TV's "At Home with Action Bronson." Essentially, it's an invite into Bronson's own Flushing, Queens apartment and kitchen 'fridge. Culinary skills are blasted, front and center as Thanksgiving leftovers are re-mixed and re-mastered, for all intensive purposes. Master Chef Action plates an innovative helping of Turkey Sliders: Corn muffin, turkey breasts in gravy, cold mac-N-cheese, corned beef cuts, and toasted marshmallows.
The latest output from Action Bronson, Well Done [1 of 5 pre-recorded albums] was produced by Statik Selektah and just released on Nov. 22nd. His previous effort... proper debut, Dr. Lecter (Tommy Mas) was one of 2011's most critically acclaimed albums. His limited discography also includes: Bon Appetit EP, The Program EP, "Holy Trinity," Bon Appetit... Bitch!!! (mixtape), and a miscellaneous collection of various Internet-released promo singles. Another interview music-food centric featurette of particular note was recently aired on "Last Call with Carson Daly" (NBC-10).
Posted by Matt Horowitz at 2:08 PM