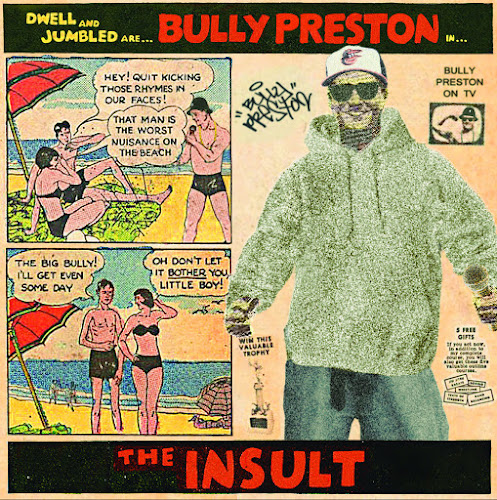 "I'm walkin' down the street mindin' my biz, just thinkin' about my wife and my kids and all the stupid sh*t I did when I was a kid. I pass this dude mean-muggin' - huh? The way he's lookin' kinda buggin' me - what? This motherf**ker tryin' to thug with me - what the f**k? Tryin' to invoke The Incredible Bully P. But I don't know, guess I'm beyond that; then again, a year ago, I was beyond Rap. But now, I'm back and it's all thanks to Jumbled Beats for makin' music for the mind. Designer. Sonic treats..." Dwell mercilessly rhymes on "Lovely Day to Bully;" the intro to THE INSULT, an album in collaboration with John Bachman as Bully Preston, quite simply billed as "Jumbled makes the beats / Dwell raps to them." Dwell & Jumbled's Bully Preston project dates back as far as 2011 with then stand-alone single, "'llatio," which has now been follow-up by their proper 12-track full-length debut entitled THE INSULT. It appears as though Jumbled & Dwell first collaborated on "Underground" from Napalm Def AKA Jumbled & salk. AKA Constituents' clint. from Our Only Escape, Vol. 1 (2009.) clint. is of course, the post-& half of Dwell & salk. I've personally, been hearing rumblings about a Bully Preston EP—now, effectively morphed into a full-length—for at least a year now, if not more. "The first "beats" Jumbled ever made, were put on a tape that was given to Dwell... Dwell has been an integral part of Jumbled's career, often recording and mixing tracks," Bully Preston's recent press release detailed. Fast-forward to 2016: Jumbled, Dwell & salk. reunite for "Train of Thought" from Jumbled's [I wish it was longer] AKA WIWL and released the first official track under the Bully Preston banner, "Bang The Bongos" from his Action Shots EP.


"An auto-corrected text message from Dwell to Jumbled, asking to secure a beat to write to was the genesis of Bully Preston. A year and a half later, the debut album, THE INSULT is released into the world," bp press release continues. THE INSULT was preceded by three pre-album singles: the aforementioned "Bang The Bongos," Family Guy-sampling "Bully Kong," and hockey-referencing "Let's Get Saucey." THE INSULT is chock-full of cleverly inter-woven samples, references, and allusions to Black Sabbath guitarist Tony Iommi, Run-D.M.C. Aesop Rock, Dr. Seuss, Freddie Blassie, and even The Wedding Singer on "I Want Money." Jumbled contributes a wide array of multi-layered beats from all over the map, providing an interesting contrast to his latest release, The Ghost of Len Bias EP with partner-in-rhyme UllNevaNo. BULLY/Bully Preston seems to have provided Dwell with a MADVILLAIN or Dr. Octagon-esque alter ego, in which he could be "more braggadocious and care-free with his rhymes," after his 10-year hiatus from sharp-spittin'. THE INSULT really is a well-constructed, expertly-delivered album and you can tell Dwell & Jumbled are just a couple of old friends having the time of their lives together in the studio and the Record button "just so happened to be pushed on." THE INSULT leaves the listener on a bit of a cliff-hanger with album closer "Death of a Bully," but even if this is the first and last chapter of Bully Preston's story, it sure was an enjoyable sonic ride! Bully Preston's THE INSULT is now available for streaming an download at a Name-Your-Price basis on Jumbled & Dwell's collective Bandcamp page. Also, feel free to Follow @bullypreston on Instagram for the latest BULLY-related updates.


"This was the most fun and uninhibited I’ve ever been, creatively. The whole idea of BULLY was to not be too self-involved, let the music go wherever it wanted, and to stay out of its way. During the writing, that idea was there but, I didn’t want to think too much about it. There were zero self-imposed restrictions during the writing process. The only thing I wanted the music to be was BULLY! There are two tracks that stray from the idea a bit, but I think they also fit the extremely loose narrative of the album. From the beats to the rhymes, I just wanted it to be fun and I think we accomplished that... I guess you could say that the BULLY persona was born with the "'llatio" track, but it was more happy accident than anything else. We had a Napalm Def recording session at my house and that beat was one that John was working on. I think I helped him clean it up a bit and I liked it... a lot! I think I sent him a demo a couple of days later of two verses I had written to it. I told him I wasn't tying to jack his beat, but he said I could have it, anyway. I hate that hook, though. Just kind of laziness, on my part, but I wasn't really writing, at the time. That’s definitely a BULLY track, though. We just didn’t know it then."

Posted by Matt Horowitz at 9:05 AM