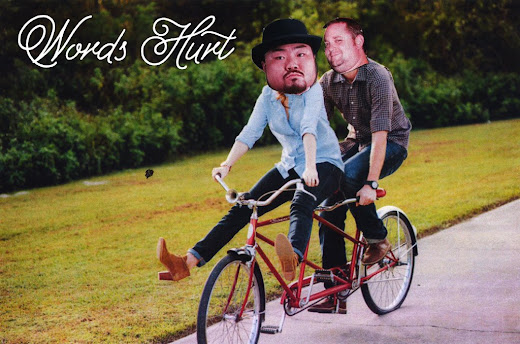 "My name is Lang Vo. I'm one half of WORDS HURT with Def Jux alum ALASKA and the other half of the group REINFORCED STEEL with my friend and sage, Kwamizzle. I've been producing and making beats for the last 20+ years. Back in the heyday, before I had kids, I used to work the Columbus, Ohio scene and did shows with Camu Tao and opened for his group, S.A. Smash. I've opened for Atmosphere, Mr. Lif [& Akrobatik AKA] The Perceptionists, Blueprint with Soul Position [RJD2], etc. Although, I never hit "The Big Time," I had a great time back then. My last show was a show with Killah Priest in 2009. Once I started having kids, I still made music and did a few shows here and there in Austin, Texas, but staying out late and having drunk people dump beer on my equipment didn't seem as fun anymore. I didn't pick it back up again seriously, until I started working with Alim Wade, a rapper in Atlanta. He started sending my beats out to people like Kool A.D. and Mr. Muthaf***in' eXquire; people started Following me (and Blocking me) on my Twitter and I eventually, befriended ALASKA, when he ran SYFFAL.com. Ever since then, we worked on a few things here and there, until I mixed one of his mixtapes. I jacked the vocals and did my own beats on them and sent them back to him, birthing WORDS HURT and thus, bringing [me] back out of the dark."

"Every Hip-Hop head my age, who heard this album for the first time, had their world stop and change overnight. The very first [drum] kick and snare melted my [perspective] of time and space. It was 1993, I was 14, and I knew what I wanted to do for the rest of my life. I had already been trying to figure out how to make little beats on my moms ASR-10 and a 4-track Tascam my stepdad had. This album, from front-to-back, made me crazy. The samples were everything I grew up with; all the Kung-Fu movies I watched with my dad, were in these songs. I had never heard them used in this way before. The basslines and drums were so dirty. They knocked in this weird mid-range CRASH-and-BAM way that made your neck snap back-and-forth, like it was going to fall off and spurt blood out of the neck hole area. 24 years later, this is still one of my go-to albums. I still listen to this album in awe of how The RZA chopped the drums in the fashion that he did. They seem so simple, but they are impossible to duplicate. The track that made my bang my head the most was "Wu-Tang Clan Ain't Nuthing ta F' Wit.'" That sample hmmm's and the finger snaps and those f**king drums were so hard. Each Clan member went all-in on that song."

"This album came out when I was three, but when I was about six, I found this album in my cousin's vinyl box. I put it on because I remember liking the girl's face on the cover. The first song was "I Love Rock 'n Roll" and when it started, I was floored. I played so much air guitar to this song, that you would have thought I actually knew how to play all the chords. The other song that caught my ear was "Crimson & Clover;" the way they sang the chorus in that Tremolo wah-wah [pedal] noise way made me sing that over and over (pun.) I used to sing it by myself, all day, by putting my hands to my mouth and trying make the wah-wah sound, while singing the words. When I got older, I found this album again. I love the way Joan Jett sings and at the end of each verse, she goes down in pitch, rather than up, like a lot of Pop singers do. What strikes me about this album is how minimal and catchy it is. You don't need a lot of bloat, if you make a good enough song. So, after ingesting "I Love Rock 'n Roll" when I was learning how to produce songs, it taught me not to go overboard on sounds, if I don't have to. Let the groove be the spirit of the music. My favorite track here is "I Love Rock 'n Roll." The stomps and claps combined with that riff, makes the most catchy song of that generation. Joan sang in the husky melodic fire that gave me my first crush."

"I know, these last two album selections don't sound like they should be inspiration for a Hip-Hop producer, but I find more insight on how to make beats more from people who actually know how to play instruments. This particular album has become part of my soul. It's like one long, perfect song. Jeff Mangum sings like his life is being ripped apart by every angle. The production is so raw-sounding. The synth/bass is so low and the horns land perfectly in every spot. I love the way a melody will be played and then, show up again on another song, bringing the whole sound of the album together in one harmonious thought pattern. Listening to this album, taught me that everything doesn't have to be perfect. Especially, someone's voice. The music doesn't need to have science-like precision for someone to make good songs. All you need is your heart and a great melody bouncing around in your head. "Oh Comely" is probably the greatest song ever made. Period. Jeff sang like he was heading to Hell right after he left that session. The way the horns and his vocals at the end combine together, make The Earth crack open and all the lost souls that have ever died escape into the ether."

"This album is one of most well-crafted Hip-Hop albums of all time. Very few Rap records back then had this much Pop sensibility and still banged on every track. Even "Killing Me Softly" had that Boom-Bap all of us old folks love from that era. Also, let's not forget, Lauryn Hill murdered everything moving. No one was (or is) as good as she was on that album!"

"Many may disagree, but I feel like this is Tribe's strongest album. I think Q-Tip hit his 10,000 hours when he produced it. Every song has its place from beginning to end. I love the fact Phife [Dawg] has his own songs and Tip has songs and it felt like there was a perfect balance to the whole project. All the samples were so on-point and no one is as good at drum programming as The Abstract [AKA Q-Tip]. Stand-out track for me was "Sucka N***a." It was the first song in Rap, that I heard, where a verse was repeated and the song had so much meaning; yet, it never sounded repetitious. I still listen to this album, since the first day it came out, at least once a month."

"This track was originally recorded as part of the SOUL MUSIC FOR THE SOULLESS sessions, but did not make the cut. Instead, we are offering it as an exclusive free download with our friends at TheWitzard.com," WORDS HURT (ALASKA & Lang Vo) wrote on their Bandcamp page, upon uploading "OFF INTO THE DISTANCE." We're proud to be premiering the second SOUL MUSIC FOR THE SOULLESS-related track in just as many weeks here at The Witzard. Just last week, WORDS HURT gifted us with "WORLD'S WORST LIFE COACH" and their album pre-order announcement and this week, we're back with a SOUL MUSIC FOR THE SOULLESS B-side from those very sessions; not unlike its predecessor, "OFF INTO THE DISTANCE" has that 1990's Boom-Bap feel meets fresh 2017 edge you would expect from two aging 40-something Hip-Hop heads. "We all crave the big ending rapture or Apocalypse / nuclear Armageddon or Hale-Bopp and a rocket ship / Yo—it's a weird coping mechanism / if we're here to see the end, I guess there's nothing that we're missing" ALASKA ferociously rhymes atop Lang Vo's sparse, Def Jux-evoking beat (shout-out on the "super hot guys" Bandcamp tag!) "Old souls" at heart, WORDS HURT's SOUL MUSIC FOR THE SOULLESS will become available wherever fine-cut records are sold this upcoming Tuesday, November 28th today, Friday, November 17th (SURPRISE-RELEASE!) Lang, ALASKA, and I are currently working on an all-inclusive emailed interview to accompany SOUL MUSIC FOR THE SOULLESS, acting as the final piece of our three-pronged album roll-out initiative.

Posted by Matt Horowitz at 6:27 AM