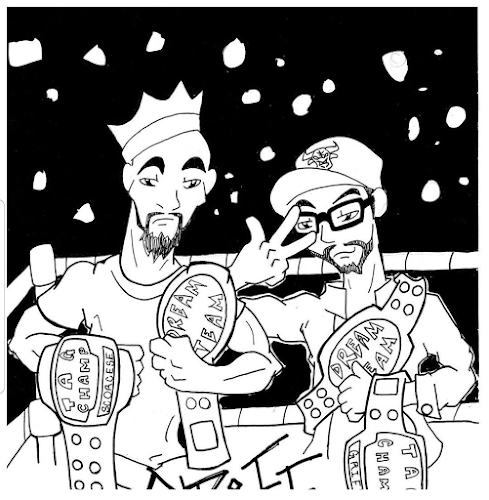 
Earlier this year, we were fortunate enough to conduct and publish an all-inclusive interview with Griff/Scorcese, along with a special double-premiere of "Flex Kavana" Feat. Vic Spencer AND Dream Team... opener "Pink Flamingo Weather." "So, Stokely gave me two directives: he wanted a "Rick Ross-style" album and he wanted it to "sound like New York." He approved all the records and made sure to direct me to his best samples," Scorcese exclusively told The Witzard within said interview. Scorcese Lorde Jones has been adding to an ongoing #BREAKDOWN [THREAD] on his Twitter page, @JihaDScorcese, in which he'll be meticulously breaking down each track from Dream Team... over the course of next month or so. Dream Team: A Stokely Hathaway Joint is currently available on your digital streaming platform of choice and is, also, directly available from Griff/Scorcese on Bandcamp in a number of exclusive packages and formats: the #1 Contenders Bundle, Dream Team: A Stokely Hathaway Joint (Limited Edition CD,) Legends Only T-Shirt, CHAMPIONS Shirt (Size Medium ONLY,) and Dream Team: A Stokely Hathaway Joint (Limited Edition Cassette.) Griff/Scorcese have very recently made THE SIGNING BONUS CD from the #1 Contenders Bundle available on it's own, as well, which includes FOUR new B-Sides, TWO M.Waisome remixes, and TWELVE super-exclusive instrumentals from Dream Team...

Posted by Matt Horowitz at 8:55 AM