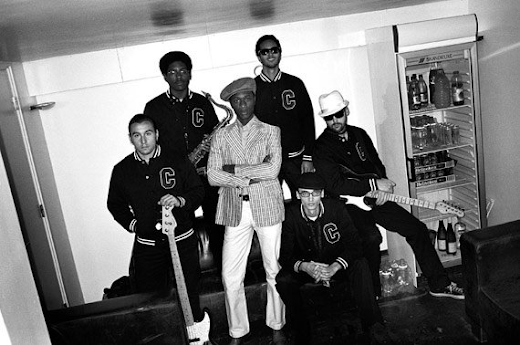 The Grand Scheme are a Los Angeles-based "SOUL POWER" band, who, according to their Facebook About (Me) section, make "Soul for your mouth." Self-described "World Travelers & Explorers," The Grand Scheme have functioned as the backing band for American musician, singer, songwriter, record producer, philanthropist, and emcee Aloe Blacc FKA Nathan Yell. The Grand Scheme have been backing Blacc ever since his career-securing break-out with 2010 single, "I Need A Dollar," if not longer. The Grand Scheme's current line-up consists of drummer Te'Amir "Yohannes" Sweeney, bassist Joseph "Joe" Gonzales, trumpeter Chris Bautista, guitarist/producer/musical director Joel Van Dijk, saxophonist Randal "Randalio" Fisher, and keyboardists Peter Dyer & Farmer Greif. The Grand Scheme's players have collectively contributed to recordings for artists as varied as Blu & Exile, Breakestra, The Velvet Underground founder John Cale, EMANON, Empire of The Sun, Fashawn, fun. Charlotte Gainsbourg, J. Cole, and The Last Shadow Puppets, and Tenacious D on their own time. Aloe Blacc & The Grand Scheme have played numerous events and appearances together over the years, including, but not limited to, Jimmy Kimmel Live, The Today Show's Summer Concert Series, NBC's Songland, and the Detroit Lions' 2019 Season Launch Week showcase.


Now, it appears as though, The Grand Scheme are stepping out on their own for the first time with their very own Funk-drenched single: "Hold On to Your Bag" B/W "The Scheme Theme" will be dropping on Friday, November 22, 2019. San Diego-based imprint Common Good Records will be handling both the digital and physical (7-inch) releases of said double-sided single. Actually, as of earlier today, Friday, October 18, 2019, there's already a super-limited edition Test Press 7-inch available directly from Common Good Records for the extremely reasonable price of just $12.99! The Grand Scheme's Aloe Blacc-featuring "Hold On to Your Bag" was released across digital platforms roughly a week ago and it has already amassed a staggering 60,000 streams world-wide. While the song itself is great and extremely catchy, one of my personal favorite moments occurs post-fade out at around 3:32-4:23, as someone explains the origins of the song's central hook/refrain, "HOLD ON TO YOUR BAG... DON'T LOSE IT!" Below, you'll find a stream of "The Scheme Theme" originally uploaded in 2014—then, known simply as "Scheme Theme"—as well as a recent video of Aloe Blacc & The Grand Scheme performing an impassioned version of "SOS" from Avicii's posthumous album, TIM on Jimmy Kimmel Live.


"Created in the wake of a massive European tour at Modern World Studios in The UK, "Hold On to Your Bag" is The Grand Scheme's [homage] to the "I Need A Dollar" Tour of 2010-2012 with Aloe Blacc. At the end of a full summer of festivals and tour dates in Europe, The Grand Scheme spent their last four days in The UK recording and writing as fast as they could. They were on fire after a summer with many highlights including Glastonbury, Jools Holland, and many other TV and festival performances. After playing so frequently together, they were tight as ever and eager to write some original music. "Hold On to Your Bag" was partially inspired by a dance break in the middle of their set in which they played the Soul Train theme and had the audience re-enact the show's famous "Soul Train line."

They started incorporating the chorus line into middle of the song, in reference to a funny experience saxophone player Randal Fisher had on the bus in Los Angeles. While in the studio, they flushed out this new track with Peter Dyer's Funky clavinet heading the charge. And then, the music sat in the vaults... until NOW! Too good to be relegated to obscurity, Aloe, The Melody Boys (Chris Bautista & Randal Fisher,) and Farmer Grief came in for the last touches at guitarist and producer Joel Van Dijk's home studio. Joseph Gonzales, Te'Amir Sweeney, and Peter [Dyer] had already recorded their Funky legacy. Common Good Records, then, stepped up to the plate to put this Funk on wax. The Grand Scheme has more releases and tunes coming, including a 7-inch vinyl with "Hold On to Your Bag" & "The Scheme Theme"—also, coming digitally next month. Stay tuned, and "Hold On to Your Bag... Don't Lose It!'"