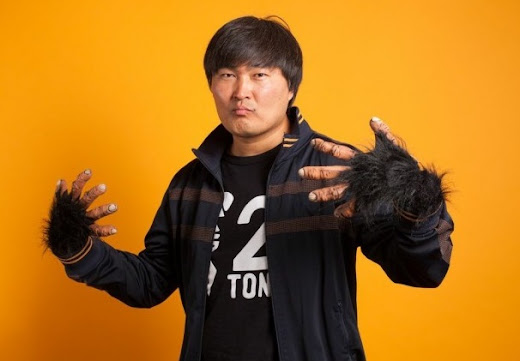 Mike Park is a Korean-American Punk-adjacent musician and founder of Asian Man Records, Dill Records, and Fun Fun Records. Park either currently is or was, at one point, part of Psychiatric Disorder, Kitty Kat Fan Club, Maguma Taishi, Ogikubo Station, Shaken 69, Skankin' Pickle, The Bruce Lee/B. Lee Band, and The Chinkees. Mike Park has toured the world countless times since the 1980's, although, has recently been forced to scale back a bit due to Tinnitus and general hearing loss. In addition to a gaggle of releases with the aforementioned bands, Park has recorded and released three largely acoustic solo albums between 2003-11: For The Love of Music, North Hangook Falling, and a children's album called SMILE—plus, a self-titled CD-R exclusively "produced for (and sold on) Mike Park's UK tour in 2009 with Classics of Love." It appears as though Park has recently been going through the Asian Man "vaults" and has managed to re-discover some unpolished, unheard, and largely unreleased gems; during the Okinawan Love Songs EP sessions earlier this year, it looks like Ogikubo Station (Mike Park, Maura Weaver & Megan Schroer) recorded an array of covers just "for fun." Ogikubo Station's cover of The Beatles' "I've Just Seen A Face" remained Unlisted on asianmanrcords' YouTube channel, until it was re-discovered by Park and unleashed unto the masses on Oct. 8, 2019.


Now, it appears as though something very similar happened with the music video for Mike Park's "On That Stage" from 2004's For The Love of Music. "This video was directed Jon Yi back in 2004. At the time, I hated the video and didn't understand the goofiness. I refused to put it up on the [Asian Man Records] channel," Mike Park recently explained within said videos' YouTube Description. "But after revisiting this video, I've realized how mistaken I was. The video is genius. And I'm so happy to have it up for all to see this silliness," Park continued. Oddly enough, it appears as though For The Love of Music was released on Hopeless Records' sub-label, Sub City Records, in conjunction with Asian Man Records, of course. After laying dormant for nearly 15 years, the Jon Yi-directed music video for "On That Stage" has finally seen the light of day again. "This is just fun, but I was trying to be serious! What's wrong with me!" Mike Park quipped yesterday on the Asian Man Records (@asianmanrecords) Twitter page. He's right, Yi's "On That Stage" music video treatment really is a fun, light-hearted affair with Park comfortably seated playing his acoustic guitar in a stark white room, while all sorts of strange hi-jinx occur all around him. It's truly just something you have to witness for yourself... Mike Park's back catalog is currently available on your digital streaming platform of choice and it appears as though The Bruce Lee Band are currently plotting a return-to-form.

Posted by Matt Horowitz at 9:22 AM