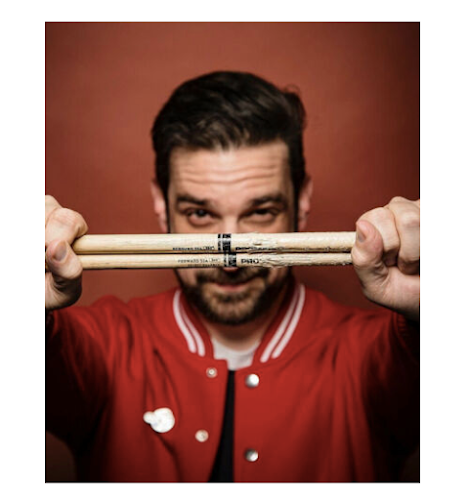 Tony Thaxton is, likely, best known as the drummer for Pop Punk/Emo band, Motion City Soundtrack; first joining the band around 2001-02 through 2013 and returning again for Motion City Soundtrack's 2016 "farewell" tour and their upcoming DON'T CALL IT A COMEBACK 2020/"reunion" tour. Thaxton currently drums for Tiny Stills & Don't Stop or We'll Die, in addition to Motion City Soundtrack. Although, over the years, he has, also, played drums for/with Aimee Mann, "Weird Al" Yankovic, Jonah Ray, Ted Leo, Braid, and Paul F. Tompkins. During his various stints and gigs, Tony Thaxton has become an accomplished podcast creator and producer for his own Feliz Navipod!, Cloud City Soundtrack, and, most recently, Bizarre Albums, as well as Alison Rosen Is Your New Best Friend. Cloud City Soundtrack, in particular, is a "weekly Star Wars comedy music video" series, as well as a companion podcast for Patreon supporters. It appears as though Thaxton has been doing Cloud City Soundtrack for over two years now and has created 100+ Star Wars-themed novelty songs.


Although, now, with his latest podcast endeavor, Bizarre Albums, growing in both size and popularity, Cloud City Soundtrack will be going on an indefinite hiatus and it's Patreon page will be morphing into Bizarre Albums this Thursday, October 3, 2019. To help commemorate the change-over, Tony Thaxton has created a Cloud City Soundtrack Bandcamp page and put together a 19-track greatest hits/best of-style compilation dubbed Star Wars Songs. It includes such infectious intergalactic smash-hits as "Jabba The Hutt," "Darth Maul," "U-3PO," "Lando Calrissian," "R5-D4," and 14 more! For a limited time, every Star Wars Songs purchase will come with a complimentary Cloud City Soundtrack enamel pin & sticker, see further details below. Bizarre Albums is now available on your digital streaming platform of choice and thus far, Tony Thaxton has already covered everything from Alvin & The Chipmunks' 1980 album, CHIPMUNK PUNK to Bruce Willis' 1987 R&B/Doo-Wop album, The Return of Bruno. Motion City Soundtrack's DON'T CALL IT A COMEBACK 2020 Tour will take place from 12/31/19-5/24/20 with tickets for select cities still currently on sale.


"Hey, everybody. As I had told you last month, my schedule had gotten crazy and was making it hard for me to keep up with this Cloud City Soundtrack on Patreon. And it's true. All of it. What is, also, the truth is, after over two years and over 100 Star Wars songs, I think, I need even more of a break than I initially realized. I'm just feeling a little tapped out on Star Wars[-themed] musical ideas, at the moment. And I don't want to keep forcing myself to push out new ones JUST BECAUSE. So, here is what I am going to do: a few months ago, I had offered a special enamel pin. Well, I still have some left over. So, I am going to offer those up again, for a lower price for you loyal patrons. If you want one, I'LL, ALSO, THROW IN A STICKER. There are two ways you can do this. If you upgrade your pledge to $10 (or if you are already at $10 or higher,) send me your address and I will send you an enamel pin and sticker!

I'm, also, putting up a Bandcamp page, if, for some reason, you would rather support me that way. Send me a pic of your Bandcamp receipt and your address to tony@tonythaxton.com and I will send you the pin and sticker! So, what does this mean for the future of Cloud City Soundtrack? For now, hiatus. So much of my focus lately has been on my new podcast, Bizarre Albums. At the change of the month, this Patreon is going to become a Patreon for Bizarre Albums. So, if you're interested in THAT new content, please, stay on-board on join me! But I, also, totally understand, if this is where we part ways. I still owe one more song and podcast for this month, so, I'm not quite done yet! Thank you all for you Patronage!"