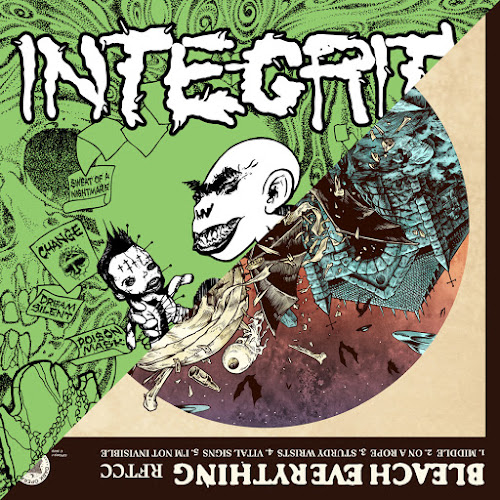 For the latest installment of The Witzard's Punk/Hardcore On Wax, we're covering an upcoming split album from Richmond, Virginia-based Hardcore/Punk band Bleach Everything and Belgium/US-based Metallic Hardcore Punk band Integrity. Said release is entitled SDK x RFTCC, which stands for Septic Death Karaoke x Rocket from The Crypt Covers with a side each from both Integrity & Bleach Everything. SDK x RFTCC is, actually, based around a 1992 Japan-only 2x7-inch split from Septic Death & Rocket from The Crypt fittingly titled Two Seven Halves, which was limited to somewhere between 85-100 Pushead Fan Club-only copies. Integrity have previously covered a number of Septic Death originals on a handful of 7-inches and CD's including Integrity, Change, Taste of Every Sin, and Walpurgisnacht.


"Dwid [Hellion] & I first got to know each other many moons ago over sharing stories about how Pushead was a huge early factor in getting exposed to Japanese Hardcore and early non-Japanese Hardcore bands inspired by that particular style," Bleach Everything frontman and Dark Operative founder Brent Eyestone recently explained to AltPress. "Pushead's band, Septic Death, is one that shaped both of us forever, and his old D.I.Y. record labels—Pusmort [and] Bacteria Sour—still provide sources of visual and aural inspiration to this day. Somehow, in conversation one day, Dwid & I came up with the idea of doing a split LP, where [Integrity] played the Septic Death "role" and Bleach Everything would play the RFTC "role," all under the mission of creating the most elaborate tribute to that [record] as possible," Eyestone continued. Each band will cover five songs from Septic Death & Rocket from The Crypt and, so far, two covers from each band's side have been released: Integrity's "Change" & "Thaw (Cold World)" and Bleach Everything's "On A Rope" and closer "I'm Not Invisible."


While Integrity had previously covered a number of Septic Death tracks on the aforementioned releases, Dwid Hellion & Domenic "Dom" Romeo made use of some original SD source material and layered their own vocal and guitar overdubs atop for five completely re-recorded and overhauled tracks for 2019. In addition to Dwid & Dom, SDK opener "Sweat of A Nightmare" features guest lead guitar riffs from Darkest Prince. Bleached Everything's side, RFTCC, on the other hand, features vocalist Brent Eyestone, guitarist Graham Scala, bassist Kelly Posadas, and drummer Ryan Parrish covering five of their personal favorite Rocket from The Crypt compositions. However, Bleached Everything pulled in a bit more "musical muscle," so to say, for their side, including guest vocalists Riley Gale of Power Trip & Mike Kennerty of The All-American Rejects on "On A Rope" and Christoper Royal King from This Will Destroy You on "I'm Not Invisible." INTEGRITY "SDK" x BLEACH EVERYTHING "RFTCC" will see a wide release tomorrow, Halloween, October 31, 2019 through Dark Operative/Relapse Records both digitally and on emerald green & clear-colored 12-inch vinyl.


"When The All-American Rejects were touring non-stop, our whole thing was for me to get to venues early, pick Mike up, go eat some Mexican food, and, then, go record shopping. So, when I was arranging vocals on "On A Rope," he instantly came to mind as the perfect guy to start the backing chorus with. I've always loved his singing voice and he truly understands the nerdiness behind the project... While putting down my main vocals for the song, I remembered Riley Gale & I having this awesome conversation a couple of years ago about how we, personally, used to listen to music before streaming was around and how we'd have specific songs on deck that would get the entire car-full of our friends to sing along. The top song we both cited was "On A Rope," since it's so catchy and has parts everyone can sink their teeth into. I'd never been in a band that had a guest do a verse and I'd never sung a duet prior, so this song felt like the perfect opportunity to change both of those things for good." 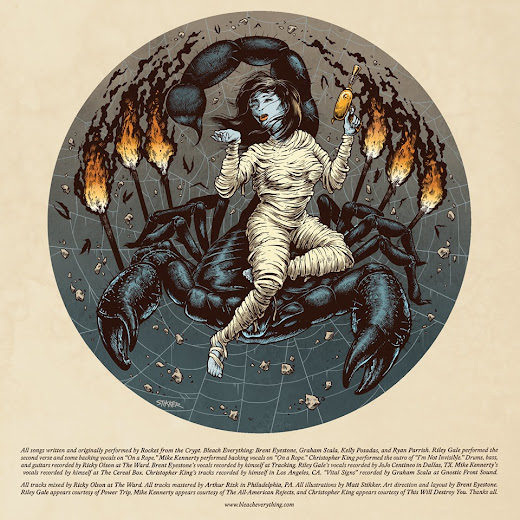 Posted by Matt Horowitz at 7:29 PM