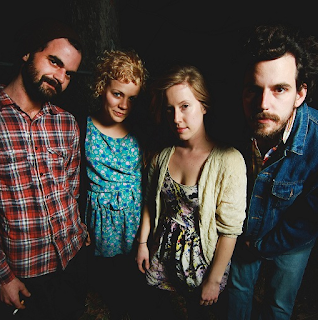 Skilled bass/keyboard player and Fork & Spoon Records PR, Chris Gardner shot me a couple emails over the weekend. We had previously built up a relationship after I did some coverage on his main band, Those Lavender Whales; Gardner also semi-frequently lends his talents to Columbia-based bands like Washed Out and Coma Cinema. This time, Chris sent me a nifty little "press kit" and digi-advance for Fork & Spoon's very own Can't Kids and their new album, Brushes Touches Tongues. It's being released on July 10th, currently available for pre-order, and will be up for FREE download on Bandcamp after the release date. Needless to say, I really couldn't do much because my POWER was out for 3-5 days. But Chris Gardner definitely understood, fittingly describing Can't Kids' overall sound as:

"Their sound ranges from a raw 90's Indie Rock to a string-enriched Chamber Pop. Complimenting [Can't Kids'] sound is a playfully clever lyrical style that toys with wordplay laced with symbolism, Pop Culture references, and spoonerisms."

Adam Cullum (guitar vox) and Jessica Oliver (drums vox) formed a 2-man band called "Dawn Shredder" sometime during 2010. The duo soon managed to morph into a quartet with the addition of bassist Henry Thomas and Amy Cuthberson on cello. After tinkering around with various compositions 2 their homebase/studio: "Shredquarters," Can't Kids have finally decided to hand their debut LP over to Fork & Spoon Records. Once my POWER came back on late Tuesday night, I quite obviously gave Brushes Touches Tongues a long-overdue spin. Columbia, SC really seems to have niched out a grass roots Indie Rock scene that isn't jaded by major label buzz and all those damn Hipster blogs... Hey, Can't Kids are no different - Seemingly inspired by Hardcore Punk D.I.Y. nature, Folk Pop, Soul-Funk, Chamber music, Rock "N" Roll, etc. Brushes Touches Tongues will see an early self-release @ New Brookland Tavern this upcoming Friday night, July 6th. "$5 @ the door and $5 for a CD!"

Posted by Matt Horowitz at 8:16 PM