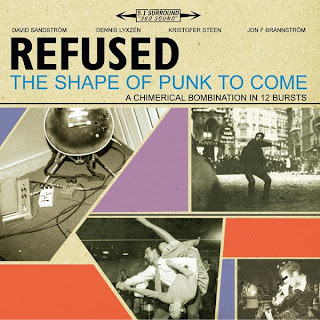 I was seriously considering writing up a review for Frank Ocean's just-released, Billboard chart-topping album: channel ORANGE ... until I saw Refused rip shit up on Fallon @ 1am late last night. Refused are a pretty infamous, recently re-formed Swedish Hardcore band that were originally active from 1991-98; They released 3 seminal albums in their heyday - including The Shape of Punk to Come, while it was critically-acclaimed, the band still feels that it didn't get a proper "push" back in the day (1998).

"We never did The Shape of Punk to Come justice back when it came out; too tangled up in petty internal bickering to really focus on the job. And suddenly there's this possibility to do it like it was intended. We wanna do it over, do it right. For the people who've kept the music alive through the years, but also for our own sakes. We feel that you deserve it and we hope the feeling is mutual!"

While taking part in a full-fledged comeback tour, Refused stopped by Late Night with Jimmy Fallon last night [Wed-Thurs.] and ended up performing "New Noise" in front of a good-sized chunk of America for the first time! Man, I wish I could've been there, cause believe me... I was "moshing" all over my damn living room like a NUT! Refused also filmed a live version of the album's title track, "The Shape of Punk to Come" on Wednesday afternoon @ Studio 8B. That one was temporarily shelved and then soon re-issued as a special "Web Exclusive." Refused are currently on tour across The US and Canada, from now through early November. Let's hope, for the sake of music as we know it, that Refused decide to record some new material in the process of all of this new-ness!
Posted by Matt Horowitz at 9:32 PM