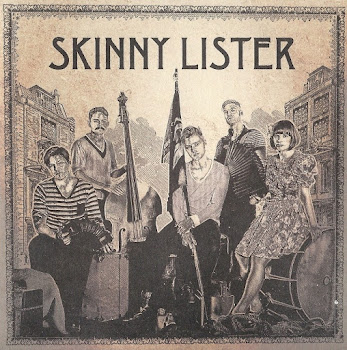 First heard Skinny Lister's acoustic set at Warped Tour 2012 (Holmdel) the other day by mere accidental passing. While waiting for something to happen, I faintly heard the sounds of what I like to call "Sailor Punk" in the distance. A strangely exuberant woman dressed in a large-brimmed hat and floral print sundress who we likened to Flavor Flav [read: hypeman] greeted my buddy Jeremy and I as we walked over to the small truck-side stage; loosely formed in 2009-10, Skinny Lister is essentially the brainchild of brother/sister Lorna & Max Thomas - the quintet is then rounded out by Dan Heptinstall, Sam "Mule" Brace, and Dan Gray on stand-up bass. Skinny Lister self-released two EP's while on their 2010 tour(s), Grand Union EP and Homemade Tour EP, which were recorded on either a canal boat or at friends and family's houses across England.


While sh*t like this could very easily be cast off as a cheesy gimmick, Skinny Lister are indeed, in the vein of MC Hammer, "too LEGIT to quit;" man, two fellas were proudly sporting yellowish sweat-stained wife-beaters, work-strained overalls, and handlebar moustaches! I had a bit of a hard time tracking one down, but I eventually snatched up a copy of Skinny Lister's mysterious $5 "Warped Tour EP" and informally met a few of the band members in the process. It features five tracks pulled from the band's debut full-length: Forged & Flagon, which is now out overseas but supposedly won't see a proper American release until October. "Warped Tour EP" is a short and sweet affair, when it comes down to it... chock-full of Folk-driven Sailor-Punk jams about backyard partyin' and drinkin' that vaguely remind me of Mumford & Sons or some old Flogging Molly. Skinny Lister are often accompanied on the road by Skinny Sisters, their "rum-dispensing, skirt-hiking, leg-shaking, five-strong, all female, party-starting troupe" and sometimes cover Max & Lorna's dad, Party George's good ol' hits.

Posted by Matt Horowitz at 4:59 PM