The Million Dollar Basher: Amanda Palmer - "Do It with a Rockstar" (Theatre Is Evil) 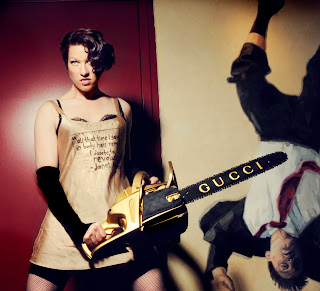 Since parting ways with bandmate Brian Viglione, Roadrunner Records, and hastily re-forming The Dresden Dolls between 2010-12, Amanda Palmer has been secretly nesting dreams of a full-fledged solo career. While she's been somewhat "musically active" ever since about 1989, Palmer's debut solo album, Who Killed Amanda Palmer? was just released in 2008. Amanda Palmer Goes Down Under and Popular Hits of Radiohead (EP) were written/recorded and released over the next few years. Amanda Palmer initiated a donate-what-you-will campaign via Kickstarter on April 20th, which eventually passed her modest $100,000 goal and raised $1 million+ from some 25,000 backers to help fund her upcoming album. Amanda Palmer soon recorded roughly "20 songs" with producer John Congleton and her newly-formed band, The Grand Theft Orchestra; Theatre Is Evil is now slated for a Sept. 11th release date through Palmer's own imprint, 8ft Records.


Deep-pocketed fans who pledged dough to Amanda Palmer's fund-age campaign will receive all sorts of interesting prizes and goodies as the album release inches nearer: Bonus tracks, "hand-written stuff," naked pictures, thank-you cards, art book/album companion, custom record players, world-wide art opening tickets, etc. Amanda Palmer will likely soon unveil some sort of alternate CD/LP pre-order package for late bloomers [loyal fans] who didn't get a chance to contribute to the Theatre Is Evil Kickstarter page. The first teaser single, "Do It with a Rockstar," who's lyrics are almost as debauchery-filled as it's Mötley Crüe-leaning title, was leaked online back in mid-June.

Quite the provocative little Pop ditty, " Do It with a Rockstar" should really help whet eager fans' appetites for the upcoming LP, as Palmer melodically sneers, "Do you wanna dance? Do you wanna fight? ... Do you wanna go back home? There's a chicken waiting on the stove." Amanda Palmer somehow manages to teeter the fine line between Celebrity Rehab and Leave It to Beaver. Theatre Is Evil will be[come] available on Sept. 11th and expect to see a music video for "The Killing Type," which Amanda Palmer filmed along with director Tim Pope, materialize very shortly!..