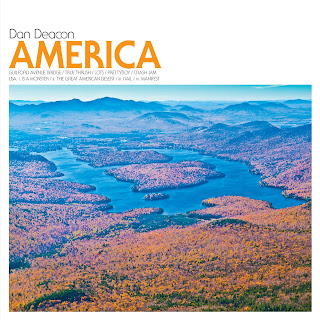 Anyone still remember that game from grade school called Telephone, where you'd be like "Psst... Pass it on!?" The game would start out with a certain long-ish phrase, travel down a line of kids, and end up being something completely different by the time it got down to the last guy. I guess Baltimore-based art collective Wham City plays a similarly-styled drawing game, which Dan Deacon's latest video, "True Thrush" is actually based around and mildly re-tweaks. While prepping the release of his new album, America (August 28th) and getting ready to head out on a MASSIVE nation-spanning tour through December, Dan Deacon somehow had spare time to write up this very press release:

"Deacon's concept for ["True Thrush"] is loosely related to the lyrics, and mirrors his use of asymmetrical repetition and evolving patterns. For the video, Dan Deacon and Ben O'Brien filmed a simple, 13-second scene. That scene was then shown to the next team. After seeing the video that team had 1 hour to recreate it - characters, props, set, costumes, and actions - as close to exactly as possible from only their memory."