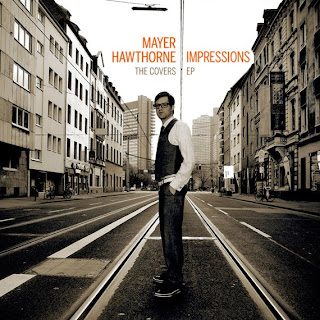 To quote 2dopeboyz' Shake, "For no other reason than the love of music, Mayer Hawthorne decided to release a 6-track [covers] EP." Included within the "mixed bag" of tracks, are compositions from little and well-known acts like: The Isley Brothers, Chromeo, The Festivals, Steve Salazar (Shorty's Portion), Jon Brion, and ELO.
Impressions was promoted and liberated for FREE by way of @MayerHawthorne's Twitter feed... with download links available @ both Stones Throw and A-side Worldwide. Along with the collection, comes a set of personalized backstories explaining each track's origins... handwritten by Mr. Hawthorne, himself. A stream of the EP's 6 tracks is also available @ Rolling Stone, for those [for some reason] not yet entirely "sold."


#6. "Mr. Blue Sky" -
"This one also features my band, The County [Quentin Joseph on drums, Topher Mohr on guitar, Quincy McCrary on piano, and Joe Abrams on bass]. Recorded live, in one take... In a tiny makeshift tent, at a festival in Dour, Belgium [Oct. 2010]."
Posted by Matt Horowitz at 2:53 PM