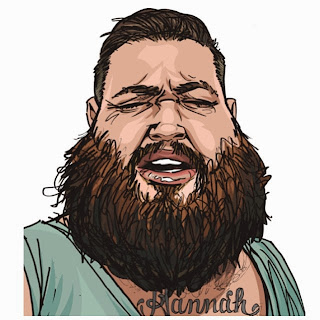 I mean... we just don't really post tracklists around these parts; It's kinda like a striptease, cause you can look but can't touch [or in this case, hear] anything ha. Although Queens emcee Action Bronson is generally the one exception to the rule(s). @ActionBronson leaked the tracklist for what he's dubbed "THE MOST INCREDIBLE PIECE OF ART EVER CREATED, I SWEAR," Blue Chips 2 early Thursday morning. Wholly produced by Bronson cohort Party Supplies, Blue Chips 2 will supposedly see a guerrilla-style FREElease on "The First Day it rains in NOVEMBER" "WITHIN THE FIRST FIVE DAYS OF NOVEMBER... NO MATTER WHAT." It's 19-song screen-capped tracklist boasts a gaggle of tasteful features from the likes of hype-man Big Body Bes, Meyhem Lauren, Mac Miller, Ab-Soul, and a certain "Legendary Special Guest In Which We Can't Disclose." While it's unclear as to whether or not Bronson's recently previewed Tracy Chapman & "Tequila"-sampling tracks will appear on Blue Chips 2, the tracklist leak reaffirms that it'll in fact include a few long-time fan favourites: "Contemporary Man" (Jan. 2012), "It's Me," and "Midget Cough." But Party Supplies' beautiful Guns N' Roses video-recycling "November Rain" (release date inspiration?) sadly, doesn't re-appear here for whatever reasons. So, I guess all we can really do is stay tuned and just #PRAY4RAIN, my friends!

Posted by Matt Horowitz at 9:16 PM