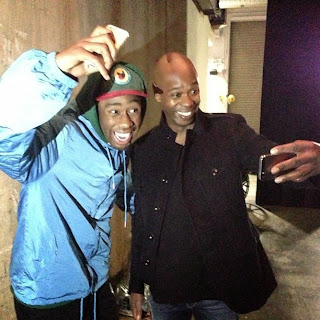 The Witzard was formed on three sonic pillars: Punk, Hip-Hop, and Indie Rock, which just so happen to be my personal go-to genres. And I guess you could say that I often times tend to favor Hip-Hop, but I really enjoy all three genres and it's always nice when they end up colliding organically. Case in point: Odd Future manager Christian Clancy initially introduced Tyler, The Creator to an Indie Rock band, who wishes to remain anonymous, after playing it for him on a plane a few months ago. Tyler liked the song so much, that he agreed to write and direct a video for the band's track "Glowing," under his Wolf Haley alias; "What people take from it is up to the viewer, I suppose," Clancy told NPR Monday night, "Controlling the narrative seems contradiction to the point. For me, it's a challenge to the assumption that ignorance is bliss, and that challenge is a timely as it's ever been."


Even though it's an anti-Hip-Hop super-saturated mini-movie, "Glowing" has Tyler, The Creator written all over it; slightly jaded, super artistic, inventive, original, and cutting-edge. He effortlessly paints a moving picture of a young couple in love that morphs into young adults and eventually, a white-haired old couple as the hyper-realistic world slowly crumbles all around them. While it might be a long shot in the dark, I'm pretty sure the mystery singer is D.A. Wallach aka Chester French frontman and sometimes member of D.A. & The Supa Dups. It would seem to all add up because of the Pharrell connection, underlying Pop sensibility, and links to Interscope through sub-label Harvest Records. But regardless, "Glowing" is an utterly amazing Indie-Pop track and I guess we'll just have to patiently wait and see who's really behind the mystery band... "WOW TYLER, I DIDN'T EXPECT ANYTHING LIKE THIS FROM YOU, CAUSE I ONLY LOOK AT THE STUPID SHIT YOU SAY AAND WON'T REALIZE YOU'RE TALENTED, WOW!"
Posted by Matt Horowitz at 7:30 PM