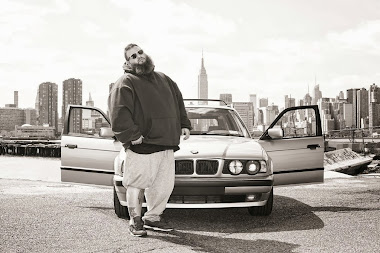 Right on the heels of his long-awaited, nearly 2 years in-the-making Party Supplies-produced mixtape, Blue Chips 2 (November 1st), Action Bronson has teamed up with VICE Records' sister site, Noisey for VICE Eats; a hyper-realistic weekly web-series "where [they'll] travel the world with Action Bronson and his motley crew of associates to check out the finest dives and dimes of the restaurant scene." Lest we forget, Bronson was a former Art Institute of New York-trained chef, who quite regularly seasons his dense wordplay with a dash of Food Network-friendly speak. Most likely commissioned by Warner Bros. VICE ultimately sets out to follow "Action and his rotating cast of dinner companions [while they] dine in a wide range of remarkable spots to give us their honest opinions - both on and off the plate." It was seemingly preceded by 2 far lesser-known VICE Eats micro-segments, dating back to this past August or early September.


The inaugural episode documents Action Bronson and self-proclaimed performer/hype-man Big Body Bes' recent trip to two-Michelin-star New York seafood spot, Marea. #BLUECHIPS2 NOV. 1st (@ActionBronson) has been quoted saying that "THE BLUE CHIPS SERIES IS OVER, AFTER THIS ONE. FRESH NEW SPIN-OFF COMING... AFTER THIS BLUE CHIPS 2 DROPS, THE NEXT THING WILL BE THE [VICE Records] "ALBUM" "ALBUM"" as recently as Friday afternoon. It's rumored to include a few previously released Internet-singles like "Contemporary Man," "It's Me," and "Midget Cough," as well as 16 unheard Party Supplies-crafted tracks and one mysterious "Legendary Special Guest In Which We Can't Disclose." For good measure, I've also included Sean Price's guerrilla-style "Pouches of Tuna" Soundcloud-spun remix up above; essentially rendering "SWINE ON PINEAPPLES" the lone Blue Chips era freestyle.
Posted by Matt Horowitz at 1:47 PM