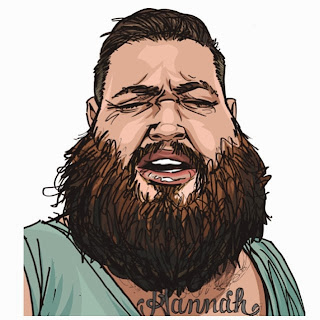 Editor's Note: I'm very proud to announce that I finally decided to purchase "thewitzard.com" last night. While the new site is currently under construction, thewitzard.blogspot.com and thewitzard.com are essentially one in the same. So, in a certain respect, this is my "inaugural" Action Bronson post ha... But make no mistake, Bronson is hands down one of my favourite rising emcees and Blue Chips (March 2012) is quite easily his most readily accessible project. "Practice" is the latest leak from his upcoming Blue Chips 2 mixtape with buddy Party Supplies, which is set to hit The Internet this upcoming Friday, November 1st. "I'M SUPPOSED TO BE THE FRANCHISE PLAYER, AND WE TALKIN' BOUT PRACTICE!?" beckons the voice of former Sixers all-star Allen Iverson (circa 2002) during the track's intro; and then, before you know it, "Practice" effortlessly morphs into a horn-laden Smooth Jazz in-debited BANGER!


I can vaguely remember reading during the initial press round-up for Blue Chips (1) that Party Supplies actually prefers recording, chopping, looping, etc. random raw beats culled from various YouTube pages for the sake of sheer originality and ease. Blue Chips 2's previously released/affiliated tracks have already taken artistic license with Guns N' Roses, an "Under The Sea" doppelganger, Peter Gabriel/Phil Collins, (and possibly) Tracy Chapman, and "Tequila." @ActionBronson recently stated in 140 characters or less that Blue Chips 2 will likely herald the end of his 90's Basketball-Drama-themed series and that he's next to start working on his "ALBUM" "ALBUM" for VICE Records; in addition to rumored full-length projects with RiFF RAFF, The Alchemist, and Funkmaster Flex. Mind you, "Practice" debuted on Real Late with Peter Rosenberg Sunday night, so it's largely un-mastered, and abruptly cuts off right around 2:45. Director and frequent collaborator Rik Cordero cooked up a pretty brilliant pseudo-back story for Patrick Ewing's infamous missed lay-up during the final seconds of Game 7 (1995). Now, I could attempt to explain it, but just do yourself a favor and check out the Blue Chips 2 teaser up above.
Posted by Matt Horowitz at 7:06 PM