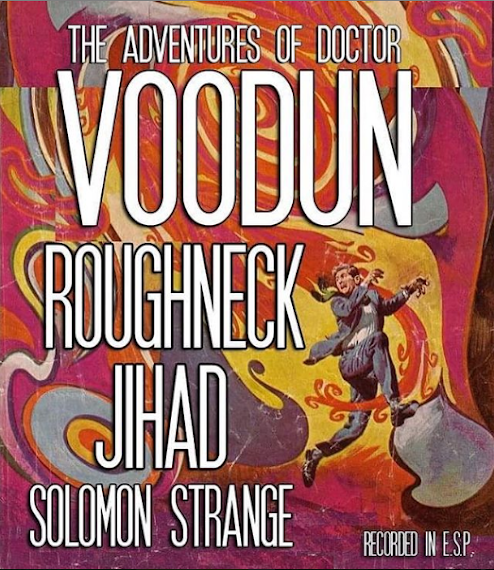 As you may have seen last week, we hosted a nearly 12-minute video on our YouTube channel entitled "'The Adventures of DR. VOODUN" Starring: Roughneck Jihad & Solomon Strange (E.S.P. Teaser.)" Honestly, it's been hard to keep this quiet for the past few months... but, back at the top of the year, The Diabolical Doctor Strange AKA Solomon Strange AKA Solomon Caine personally, reached out to me, via emailed transmission. Solomon Caine was, initially, commending us on our recent string of coverage concerning Third Sight emcee, Roughneck Jihad, as both a fan and admirer of Jihad's sharp-tongued rhymes, as well as The Witzard. As you may well know by now, The Diablocal Doctor Strange is a mysterious, other-worldly producer, label head, and founder of the Guerilla Godz posse. Long story short, Doctor Strange kindly asked, if I might be able to get him in contact with Roughneck Jihad and I, of course, immediately obliged, as an eager fan and admirer myself. I've been getting regular updates concerning the continued progress of Roughneck Jihad & Solomon Strange's EP, or E.S.P. which, in this case, stands for "Extra-Sensory Perception."


Now, seemingly out of nowhere—less than a week after their aforementioned E.S.P. Video Teaser!—The Diabolical Doctor Strange & Roughneck Jihad have miraculously returned with a staggering 28-track EP/E.S.P. entitled THE ADVENTURES OF DR. VOODUN. We've been blindly reppin' this DR. VOODUN EP/E.S.P. for the past month or so without ever having heard a note of music and now, it's safe to say, we put our neck on the line for good reason; The Adventures of DR. VOODUN perfectly exemplifies the sum of its villainous parts! Long-time fans of both Roughneck Jihad/Third Sight and The Diabolical Doctor Strange/Guerilla Godz will quickly notice, each of them have come into this collaboration fully utilizing their strengths, as well as exploring new collaborative ground together for the first time. Solomon Strange has been incorporating Lucha Libre/wrestling imagery into his album covers, as well as the underlying references to Doctor Strange; Roughneck Jihad and his in-house producers, on the other hand, have been incorporating and comic book references and 1970-80's cartoon audio soundbytes into his beats and rhymes, at least, since THE WRETCHED OF THE VERSE, if not long before.


The Adventures of DR. VOODUN was originally supposed to consist of just 5 tracks, 5 remixes, and 10 instrumentals, but it seems as though, it has now organically morphed into a sprawling 28-track project... still consisting of original tracks, remixes, and instrumentals, as well as skits all produced by Solomon Strange. For the most part, The Adventures of DR. VOODUN E.S.P.'s formatting goes a little something like this: Skit, Original, Remix, Skit/Instrumental with a bit of variety mixed in for good measure; however, most often, when it's an Original/Remix in that order, you'll, obviously, hear Roughneck Jihad start out the tracks with the same introductory rhyme. Although, with that said, it's a very organic, free-flowing release and quite honestly, it's easy to forget this is Roughneck Jihad & Solomon Strange's first time working together! The Adventures of DR. VOODUN E.S.P. is currently available to stream or purchase from Roughneck Jihad's Bandcamp page. Jihad explains tapes and vinyl are coming soon, as well as further adventures: "We are going to continue working together and Solomon already gave me a bunch of beats for future projects..."


"The project grew all due to Solomon's creative genius. He added additional remixes and some skits to hold the theme together. We beat Marvel Comics to the punch, as they have yet to introduce Jericho Drumm [Brother Voodoo] to the MCU. We added a [Black Panther/Ryan] Coogler-esque course correction; "Voodun," instead of the more colloquial "Voodoo." The project is a throwback to the times when songs like Public Enemy's "Shut 'em Down" came back even harder with the Pete Rock Remix, for example, double-dope. Solomon steps up his game on each remix, bringing new life and texture to my vocals. We plan on dropping tapes and vinyl, in addition to the digital."

Posted by Matt Horowitz at 7:35 AM