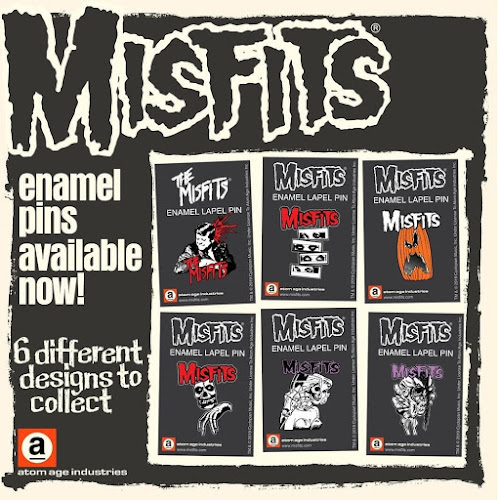 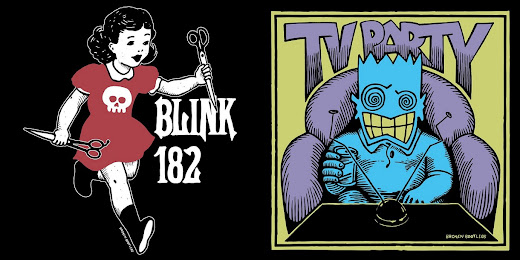 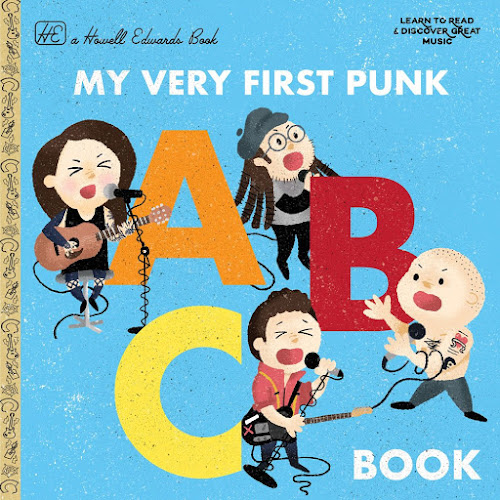 III. Howell Edwards Creative: MY FIRST PUNK ABC BOOK (@hecreative)
"Found a little project/idea we were working on a few years ago, The A-Z of Punk. The style was inspired by Mary Blair's beautiful illustration. We thought it would be fun to finish one of the pages. Here is "M" is for Misfits. What other letters should we do?" Howell Edwards Creative (@hecreative) posted on their Instagram page on APRIL 2. Howell Edwards is creative design studio based in Burnham-On-Crouch, Essex, England and is run by husband and wife team, Phil & Charlotte Howell. We had previously seen @hecreative posting their Punk/Hardcore-themed paper dolls, as well as various prints reminiscent of Archie/Riverdale, on Instagram. Now, Phil & Charlotte have returned with a seemingly abandoned idea with MY VERY FIRST PUNK ABC BOOK, which has done exceedingly well; quickly selling out in its first pressing, with a second already available for pre-order. Howell Edwards' Punk Rock A-Z features child-friendly renditions of everyone from Against Me! to Z... you'll just have to pick up a copy and see! Phil & Charlotte Howell's latest creation, HEAR US ROAR: A BRIEF HISTORY OF WOMEN IN PUNK, is currently available for pre-order from HE Creative's Print Store with orders expected to ship by or before June 2019. 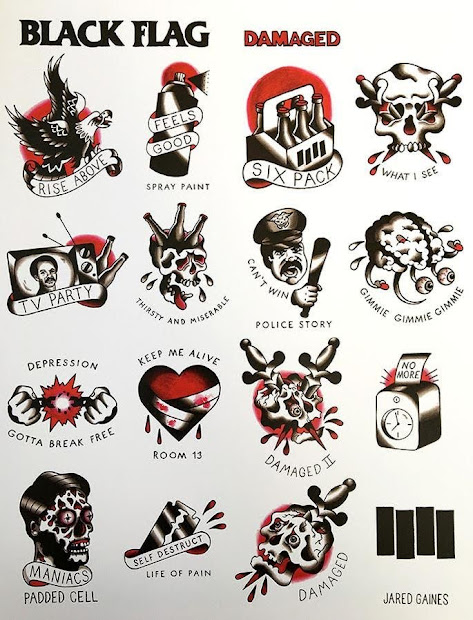 IV. Jared Gaines Art: Black Flag DAMAGED Tattoo Flash Print/T-shirt (@jaredgainesva)
Jared Gaines is a Virginia-based artist, who primarily designs tattoo flash-style illustrations. Gaines' store currently sells prints, pins, and shirts based on a variety of iconic Punk/Hardcore bands and albums. Jared Gaines has designed what he calls "Tattoo Flash"-style prints for each track on genre-shaping albums, such as AFI's Black Sails In The Sunset, Jawbreaker's 24-Hour Revenge Therapy, Alkaline Trio's Good Mourning, Black Flag's Damaged (featured above,) Descendents' Everything Sucks, Rancid's ...And Out Come The Wolves, NOFX's Punk In Drublic, Avail's 4AM Friday, and countless others. Damaged & Everything Sucks shirts are currently available to purchase from Jared Gaines Art, along with a few other apparel items. Jared Gaines also, put together a 30-track HARDCORE PUNK Spotify Playlist exclusively for The Witzard featuring everyone from Bad Brains to Veruca Salt, which you can now listen to down below the break. 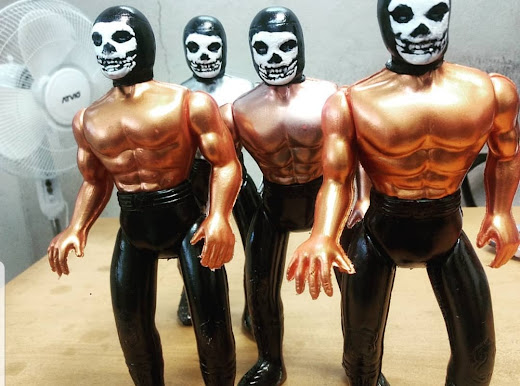 V. LUCHAFIEND Custom Action Figure (@karmadeperro)
Jesus Flores Olivera (@karmadeperro) descibes himself as a "Mexican't 30's bastard, father of the "LUCHAFIEND" figure, Bootleg dealer," who "[loves] to do trades" and "sometimes, [does] sh*tty draws." LUCHAFIEND, which I ordered about 2 weeks ago, is a custom-made action figure mixing traits from a Lucha Libre wrestler and The Misfits' iconic Crimson Ghost mascot/logo. It appears as though LUCHAFIEND is about @karmadeperro's third or fourth Misfits-related creation; with previous versions mysteriously hashtagged as "Mexican Horror," #frankensteincustom, #misfitsfiendclub, and "Mary Shelley's worst kid." "[I will] try to finish some other ideas through [the] next few weeks related to The Misfits..." Olivera recently explained to us within an Instagram Direct Message. Ch-ch-check out @karmadeperro's past, present, and future collaborations on their Instagram page and if interested in purchasing, I strongly urge messaging them before someone else gets your desired custom toy! 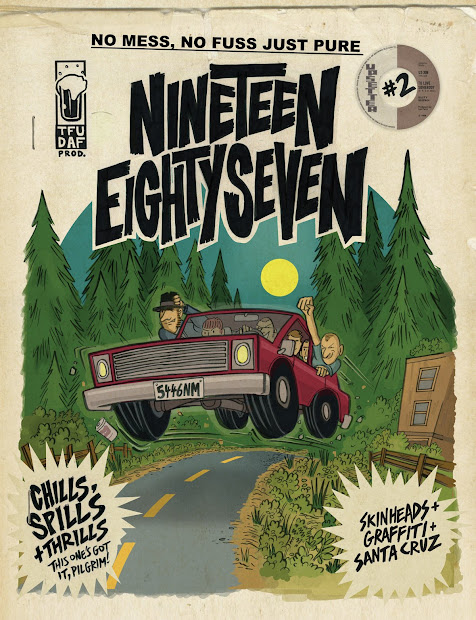 VI. TFU Studios: Nineteen Eighty Seven, Vol. 2 'zine & Soundtrack (@tfustudios & @bootsnboozemagazine)
"Nineteen Eighty Seven documents the adventures of a young graffiti artist amidst the Santa Cruz of the mid-80's. Count is a 17-year-old, who is desperately trying to prove himself to his peers and foes alike, all the while, keeping clear of the authorities. Starting as just a handful of friends, the group of graffiti artists soon grows into a small community. This burgeoning sub-culture of art existed amidst a town full of 1960's holdovers, rednecks, and Punks, whose response ranged from indifference to open hostility. A now-defunct club called Club Culture is one of the centerpieces of this story, as it was home to a growing Hip-Hop community dedicating weekends to Soul/Funk and open-mic events, while keeping weekdays to Punk Rock," Nineteen85's about. section reads. Nineteen Eighty Five Seven is the quasi-follow-up to 1985, as well as 1885. Both Nineteen Eighty Seven, Vol. 1-2 'zines come complete with with an exclusive Soundtrack Mix. TFU Studios mastermind James Reitano has previously created music videos or visuals for the likes of 14KT, Biz Markie, Cut Chemist, DANGERDOOM, DJ Nu-Mark, GZA, Kool Keith, MADVILLAIN, Manchester Orchestra, Mayer Hawthorne, Quasimoto, and Sesame Street. 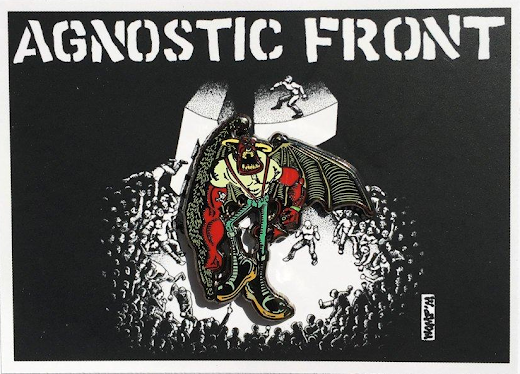 VII. No More Industries/Six Feet Under Records: AGNOSTIC FRONT Demon Skin Hard Enamel Pin (@nomoreindustries)
NO MORE industries is an online store/creative collective that produces and sells "Black Market dry goods" often related to Punk Rock, Hardcore, Counter-Culture, and Pop Culture. Some are created right in-house, while others are made by outside companies and distributed by No More Industries. Their primary section of products consists of enamel pins, patches, and T-shirts with wholesale order welcome. No More's web-store currently consists of Punk/Hardcore-adjacent products with allusions to Spider-Man/Gwen, Bad Brains, Rocky Horror Picture Show, Samhain/Danzig, AC/DC, Motörhead, The Ramones, The Dead Milkmen, Murphy's Law, and L.L. Cool J. One of No More Industries' stand-out items is their AGNOSTIC FRONT Demon Skin Hard Enamel Pin. It's one of their personal favorites and is officially licensed by Roger Miret and his Agnostic Front bandmates; "The Demon Skin" character was originally featured on the cover for AF's iconic 1986 album, CAUSE FOR ALARM on Relativity/Combat Records. Get this pin directly from No More Industries/Six Feet Under Records and check out Ian McFarland's critically-acclaimed documentary, Agnostic Front: The Godfathers of Hardcore. 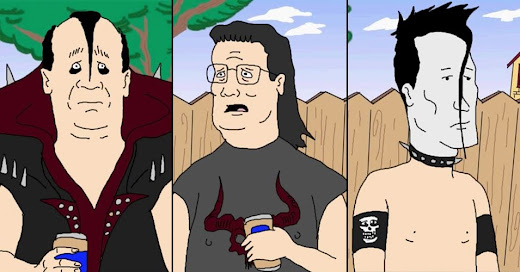 Posted by Matt Horowitz at 6:19 AM