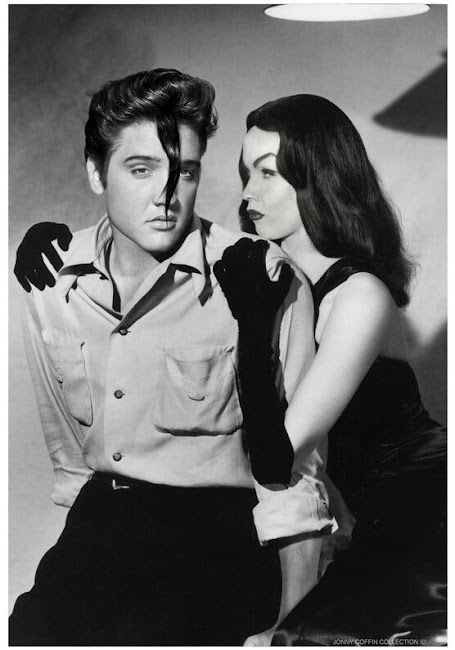 "I went to Las Vegas to perform with Liberace and went [with] him to see Elvis' show. I had never seen someone boldly standing on a stage–supposedly, a heterosexual male–wearing turquoise eye shadow and grinding his hips like that. The orchestra, one-by-one, put down their instruments. They crossed their arms and refused to play. The audience started booing and they booed him off the stage. Then, a voice said to me–and I wasn’t on any drugs–"go around the side of the hotel. There's a swimming pool and you'll find someone in a canary yellow jacket."

I went around and in the dark Moonless night, far away, I could see the double-doors of the casino, golden with light. They opened and a figure came into the doorway. It was Elvis, wearing a canary yellow jacket. He looked confusedly into the darkness, so I said, "I'm over here." We walked towards each other, sat down, and talked. I told him that I was a performer and that what happened was absolutely awful. He said, "every night before I go on, I talk to God and he always answers me. But tonight, he didn't answer. When them curtains opened and I saw all those white heads and them glasses, I knew why..."

Dad Brains are a Punk/Dadcore band based out of Oxnard/Ventura, California with a tip of the bottle lid to Bad Brains. Their Bandcamp page clarifies: "Hardcore Punk made by dads, about dads, for everyone!" Dad Brains' members include D*ck Circus drummer John Crerar, The F**king Wrath bassist Craig Kasamis, The Missing 23rd guitarist Matt Kash, and frontman Patrick "Pat" Pedraza. Last year, Dad Brains unleashed their self-titled debut 7-inch EP on Pirates Press Records, as well as a holiday-themed split 7-inch with Philly's very own Ramoms entitled MERRYXMAS. Now, Dad Brains have returned with their long-rumored second 7-inch/digital EP, dadditude to be released on Friday, June 14th on Pirates Press, again, just in time for Father's Day! "Father's Day" is the first proper single to be lifted from dadditude and, I can only guess, it features Crerar, Kasamis, Kash & Pedraza's own kids gallivanting around with their dads at a raucous backyard BBQ/Springtime gig.


King Gizzard & The Lizard Wizard are a critically-acclaimed Australian Psychedelic/Garage Rock band consisting of Michael "Cavs" Cavanagh, Cook "Cooky" Craig, Ambrose "Amby" Kenny-Smith, Stuart "Stu" Mackenzie, Eric "Mu" Moore, Lucas "Lukey" Skinner & Joe "Joey" Walker. Back in 2017, King Gizzard embarked on a courageous journey to release a whopping FIVE albums in ONE year—their ninth, tenth, eleventh, twelfth, and thirteenth—Flying Microtonal Banana, Murder of The Universe, Sketches of Brunswick East with Mild High Club, Polygondwanaland, and, finally, Gumboot Soup. After a much deserved, self-imposed sabbatical period through 2018, King Gizzard & The Lizard Wizard have, once again, returned with their fourteenth studio album, Fishing for Fishies, on Flightless/ATO Records. Now, nearly a month after the release of Fishing for Fishies, King Gizzard have already returned with a non-album track entitled "Self-Immolate." Supposedly, this track and similarly-minded "Planet B" will be appearing on an upcoming King Gizzard "Thrash" (Heavy Metal) album to be titled Auto-Cremate, which was recently teased within a Reddit AMA.