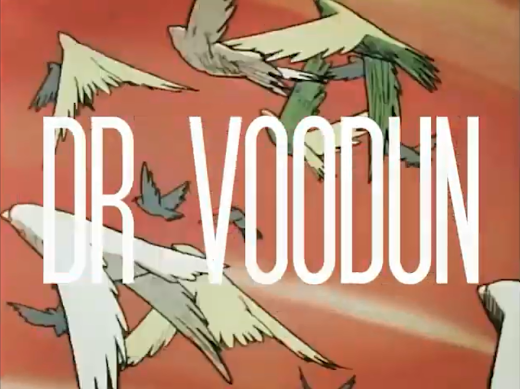 It's truly great when The Internet works in mysterious, positive ways... for example, a few months ago, The Diabolical Doctor Strange reached out to me asking if I would be able to help get him in touch with Third Sight emcee, Roughneck Jihad. After checking with Jihad first, I, of course, obliged because, quite honestly, who wouldn't want to hear a collaborative effort from The Diabolical Doctor Strange AND Roughneck Jihad?!!!??! It's been a couple months now, through which I've been getting regular status updates from The Diabolical Doctor Strange AKA Solomon Strange, via Facebook Messenger; The Witzard Proudly Presents... "The Adventures of DR. VOODUN" Starring: Roughneck Jihad & Solomon Strange (E.S.P. Teaser.) So, just to be clear, this is a video teaser/preview of Roughneck Jihad & Solomon Strange's collaborative EP, or E.S.P. AKA "Extra-Sensory Perception," seemingly entitled "The Adventures of DR. VOODUN." It appears as though "DR. VOODUN" might be a riff on or homage to Marvel Comics' character, Brother Voodoo (Jericho Drumm) who ultimately, ends up replacing Doctor Strange as Sorcerer Supreme in The New Avengers #53 and is thereby referred to as "Doctor Voodoo" and "vodun" is another term for "voodoo."


"This is going to be a crazy record. Myself and Solomon Strange collaboration. This is just the teaser the full-length is coming soon," Juan L. Betts (Roughneck Jihad) exclaimed on Facebook. It appears as though The Adventures of DR. VOODUN E.S.P. will contain 5 songs, 5 remixes, and 10 instrumentals. One early stand-out cluster of rhymes is: "Never ghostwritten / I'm the author / Your rhymes are much softer / I spit venom / Eddie Brock Venom / Rattlesnake venom / Deadly, deadly venom / I split venom / Neurotoxin venom / F**k Peter Parker and his sonic weapons venom..." However, over the course of the next 8-9 minutes, Roughneck Jihad somehow manages to effortlessly shout-out everyone from Darth Bane (Star Wars) to Foster The People. It appears as though "The Adventures of DR. VOODUN" features about 3 tracks from the upcoming E.S.P. along with 3+ minutes of audio from an unspecified anime/manga series. While we wait for further release details concerning The Adventures of DR. VOODUN, I strongly urge you ch-ch-check out Roughneck Jihad & The Diabolical Doctor Strange's latest full-length releases, Juan Sequitur and STRANGE JACQSUN with Sauce Jacqson, respectively.