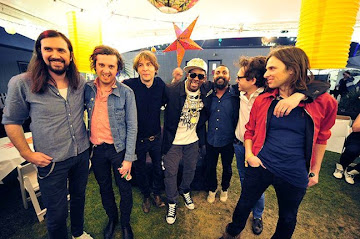 All I can think of when I hear something about R. Kelly anymore is "I wanna piss on you... Gimme that pee-pee. Gimme that poo-poo" thanks to Dave Chappelle's CLASSIC scandalous skit. But R. Kelly is actually a really talented, slightly zonked out musician and he's seemingly about to infiltrate a whole new market: Hipsters! Robert Kelly formed a new-found kinship with French Indie Rock band Phoenix at Coachella earlier this summer; performing a few unique mashed-up remixes for the unsuspecting concert-goers, "Ignition" (1901) and "Chloroform" (I'm a Flirt). It's kinda like that time R. Kelly & Jay Z teamed up for a MASSIVE album and world tour -- Except it's more like if Jay Z was 4 scrawny French guys ha. But with that said, it's not a whole lot unlike Daft Punk & Pharrell's recent mega-hit, "Get Lucky;" Just a little more Adult Contemporary and a little less Electro-fied.


Ina recent interview conducted with Radio.com, guitarist Christian Mazzalai lamented, "The idea came to us one week before the show, very late. Before going on-stage we always put on R. Kelly's music, which is very far from our music, but we love his art." Although it's still unclear exactly how many chapters of Trapped In The Closet Phoenix have seen... "So, we created a mash-up between our music and his music. We sent it to him and he said yes. The funny part is he arrived late so we didn't see him before. We met him on-stage. We didn't rehearse so there was a beautiful tension!" Phoenix recently unleashed their latest Thriller mixing board-assisted album, Bankrupt! and Robert Kelly is seemingly recording a new album called Black Panties, which has now been preceded by a super-slick, slightly altered, and sexed up "Trying to Be Cool" remix.
Posted by Matt Horowitz at 8:57 PM