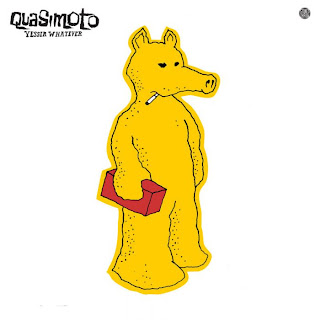 "We set out to film the video for "Catchin' The Vibe" in Quasimoto's home town [of] Lost Gates CA, but were denied filming permits. We were also denied permits for filming in Los Angeles County, possibly due to embarrassment caused in the wake of Quasimoto's "official letter of recognition" from the Los Angeles mayor and city council, who did not realize that Quasimoto was a semi-fictional cartoon character, weed-smoking promoter of chaos, obsessed with fat ass[es]." Stones Throw then recruited directors Tuomas Vauhkonen & Jeremias Nieminen, who filmed "Catchin' The Vibe" with local actors across alternate locations in Finland and Romania. It's a short, debauchery-filled affair that stars some sort of trashman collecting disposed items; cause like the say, "one man's trash is another man's treasure!" Stones Throw's included mini-press release also notes that "Madlib appears under costume in a quick cameo," which leads me to believe that he might in fact be our mysterious vinyl-making trashman... "Catchin' The Vibe" appears on Quasimoto's recently-unleashed Odds & Sods style loosies compilation, Yessir Whatever, which semi-unfortunately dropped on the same day as Yeezus, June 18th.

Posted by Matt Horowitz at 7:46 AM