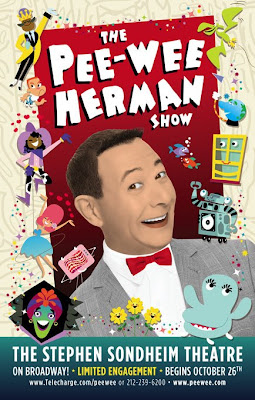 Supposedly Paul Reubens is working on 2 new Pee-Wee films: "Pee-Wee's Playhouse: The Movie" and "The Pee-Wee Herman Story." The first is an old script written in Reuben's heyday, an amped up children's film featuring characters from his highly popular '80's/'90's TV shows and movies. In an interesting twist, it has been rumored to star Johnny Depp as the title character. The second film is being toted as "the dark Pee-Wee film," it's currently in the works with writer/director Judd Apatow, is inspired by Jacqueline Susann's 1966 novel Valley of the Dolls, and will likely see a TBA 2011-12 release.
Posted by Matt Horowitz at 12:46 PM