I remember picking up a "PROMOTIONAL USE ONLY" CD copy of this album at Shore Things (a slightly used collectibles store) down on the Ocean City, NJ boardwalk in Summer 2004. Now Here Is Nowhere, the group's debut, consists of 9 tracks - 2 of which are around the 9-minute mark. Overall, it's made up of a combination of the familiar sounds of Zeppelin, Floyd, with a touch of Psychedelia, and some added pizazz. The lyrics, imagery, and sound really are a tad bit "overdone," but when looked at together, as a total package, truly do equate greatness. 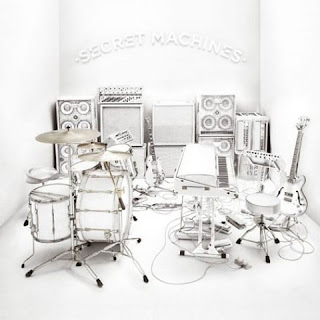 The inaugural version of Secret Machines consisted of brothers Brandon (vocals, bass, keyboard) and Benjamin Curtis (guitar, backing vocals), along with Josh Garza (drums). Since their inception, Ben has parted ways with the band, making was for new member, Phil Karnats. Curtis Brother #2 now makes up 1/2 of Electronic duo, School of Seven Bells. The Machines have since gone on to produce 2 more albums [Ten Silver Drops - 2006 and Secret Machines - 2008], a few EP's, and contributed a set of songs to the Across the Universe soundtrack - one which was performed with Bono.