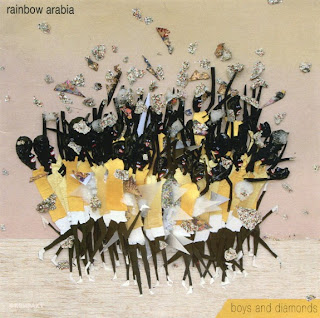 
Husband and wife duo Daniel and Tiffany Preston, collectively known as "Rainbow Arabia," are currently prepping their debut Long Player for Kompakt Records. Based in Berlin, the label will release the 2009 California-crafted Boys and Diamonds in the UK on Feb. 28 and soon thereafter (March 1) in the USA.
Kompakt's press release, issued along with the announcement of the album/their signing, describes the 11-song collection as an "unmistakable pop album;" All the while, being sure to reflect it's (and the label's) genre-bending capabilities. It then goes on to [interestingly] further describe the LP's overall sound as, "Siouxsie rubbing elbows with Shabba Ranks, Giorgio Moroder sipping daiquiris in Bali, Desmond Dekker envisioned through skittering footwork, Phil Collins sitting in with Congotronics, even early Madonna produced by Chris and Cosey."
Posted by Matt Horowitz at 9:26 PM