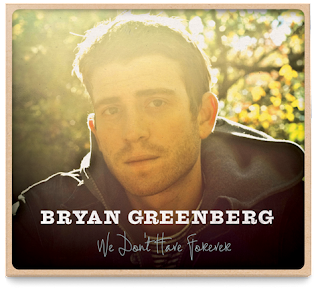 Bryan Greenberg certainly knows what it takes to "make it in America" as a successful actor, starring in such roles as Jake Jagielski on the TV show "One Tree Hill," along with numerous films. An NYC resident himself, he was a great fit to star in HBO's 2010 hit, "How to Make It In America," appearing alongside Victor Rasuk, Scott "KiD CuDi" Mescudi, and Lake Bell. Though he has/is currently acting, Greenberg is no stranger to the world of music; His first album dropped in 2007 (Waiting for Now) and his sophomore effort, We Don't Have Forever, was released last week.
So, it shouldn't be shocking that he and CuDi teamed up to take on the slower-paced song that is "You Can Run" - A style that CuDi fans are definitely used to. No one should be surprised by CuDi broadening his "musical horizons," as he's set to release a rock album in the coming future. The track is a good mix of Greenberg's Ben Folds-esque voice and guitar playing paired with CuDi's smooth rapping skills.
"You Can Run" originally debuted at a Summer '09 Highline Ballroom/Greenberg show in NYC. A video of the seemingly effortless "freestyle" soon appeared up on YouTube. Hardcore fans of both artists were surely delighted to see a studio version then pop up some 2 years later on We Don't Have Forever. A song such as this is just what Greenberg needs to get his name out there as a legit musician. The fact that it easily gets stuck in your head, doesn't hurt... or at all take away from its appeal. So, please enjoy this unique collaboration.
"How to Make It..." (Season 2) is set to begin filming in March and is slated to debut nation-wide on the network this summer. The season will also see the release of a new CuDi (Rap) mixtape, "A Man Named Scott." His long-rumored "Rock album" with producer Dot da Genius (together dubbed "WiZard") will be unleashed soon thereafter.