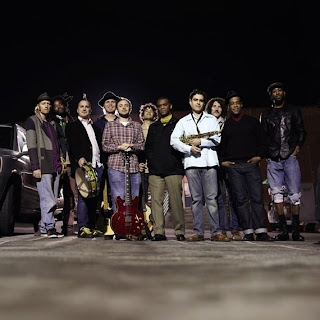 The latest addition to Stones Throw's ever-growing and eclectic label roster are The Lions; A loose collective made up of 10-12 LA area Reggae musicians. Formed in 2007, The Lions are currently putting finishing touches on their Stones Throw debut, which should be expected this upcoming Summer/Fall season. It's formative members include Dan Ubick, Black Shakespeare, Malik Moore, Deston Berry, Alex Désert, and Dave Wilder... as well as a number of additional musicians who have played with the likes of De La Soul, Barrington Levy, Beck, Raphael Saadiq, Big Daddy Kane, and Black Eyed Peas. In conjunction with the BIG announcement, Peanut Butter Wolf let loose The Lions' premier Soul-tinged Reggae track, "This Generation" (Dub). Custom edits often used in traditional Roots Reggae music, it's essentially a remixed & re-mastered version that ends up taking a few rhythmic, pretty "zany" turns!

"All the guys in The Lions grew up on classic Jamaican records so since we began we have wanted to give our records that same edge and roughness that we grew up hearing on LP's by The Upsetters, Soul Syndicate, The Rockers Band, and Roots Radics. The rhythm section was all recorded to tape, the Hammond buzzed a little, fuses blew and good mistakes were left in. We basically made the dusty Reggae-Soul LP [that] WE have been wanting to hear for years!"

Posted by Matt Horowitz at 8:26 PM