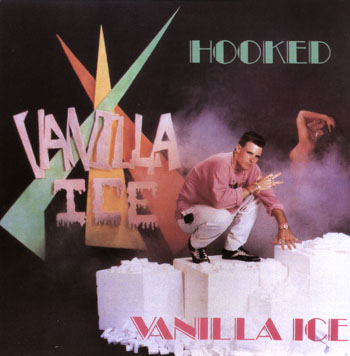 Whether you love or hate his music... one can @ least acknowledge the fact that Rob "Vanilla Ice" Van Winkle has been one of Pop Culture's most consistent figure-heads for the bulk of the last 20-some odd years. Now, we all know and love "Ice Ice Baby" and... well, yeah, that's really it. Onlookers from both sides of the coin can most likely relate a story of great joy and/or disdain to Vanilla Ice's 1990 break-out single. if nothing else, Van Winkle seems to be a driven, hard-working entertainer, who has ultimately re-invented himself time and time again. Vanilla Ice was essentially one of the first white rappers to break into the mainstream market, along with the Beastie Boys, of course. "Ice Ice Baby" is based around a sampled chunk quite notoriously pulled from Queen + David Bowie's cross-over hit, "Under Pressure" (1981).


Vanilla Ice has always teetered the fine line between irony and reality. naturally, Ice and his PR team have done their absolute best to stay on top of the semi-dated trends - Whether it be: sample-based Hip-Hop, "Nu-Metal" [Rap Rock], reality TV, or honorary Juggalo. Vanilla Ice's most recent endeavor just might be his most ironic and humorous attempt to date... Hipster-Fried Indie Rocker. Setting up shop @ a trendy, California coffee spot, Ice and newly-assembled pick-up band run through an acoustic, ukelele-tinged rendition of "Ice Ice Baby." Even though it seems to be an intricate joke, isn't that the sheer essence of Hipster-dom anyways? - Taking something so immensely corny/ironic and making it "cool" (once again). Shit, if this Soup-created video goes "viral" enough, Vanilla Ice might really end up playing Coachella 2012!
Posted by Matt Horowitz at 2:43 PM