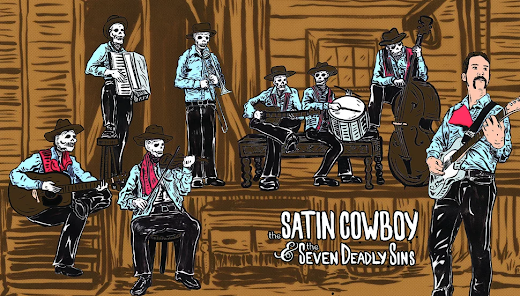 "This is the oldest song on the [Love & Loss] EP. I wrote the lyrics on a plane ride almost eight years ago and I recorded the majority of the music back then, as well. The guitar solo I played on my uncle, Mark Mothersbaugh's sweet '72 Telecaster, when I was still working for him. He was nice enough to share his fantastic guitar collection. The chorus of this song (with beautiful harmonies sung by Sam Nelson, Ricky Nelson's son) came together just a few weeks before the release. I sat on the song for years before realizing the obvious problem—it was missing a chorus! I played all the instruments myself on this one and the vocals were my first take. Something about that first pass just had the right emotion," Silas Hite wrote within a recent emailed statement concerning his composition, "Not Afraid of The Knife." Hite is a self-described "Emmy-winning film and television composer" and illustrator, as well as the frontman of awesomely-titled Satin Cowboy & The Seven Deadly Sins; his previously work includes music which has appeared within a wide array of mediums such as Nick & Norah’s Infinite Playlist, Cloudy with a Chance of Meatballs, Shaggy & Scooby-Doo Get a Clue!, Netflix original series Chef's Table, Catfish: The TV Show, The Sims 4, The Simpsons Game, Skate 3, and New York Museum of Modern Art. Silas Hite's latest release, billed as "Satin Cowboy & The Seven Deadly Sins," Loss & Love EP—through its five contained songs—touches on a number of various styles evocative of The Beach Boys, Ben Folds, Johnny Cash, Foo Fighters, and Weezer. Love & Loss EP is currently available for unlimited streaming at Silas Hite's Soundcloud page and is additionally available for purchase in either digital or $5 CD formats from Satin Cowboy & The Seven Deadly Sins' Bandcamp page.


"The lyrics are the real story though: my wife and I met when we were children. She lived in Ohio and I would visit Ohio in the summers to spend time with my family there. I had a crush on her when we were kids, but we lost touch for about 15 years. I went back to Ohio eventually and when we reconnected, it was like Cupid was taking it personally that we waited so long to figure it out. We spent four very intense days together; at the end of that time, I had to fly back to LA to mix a record. As soon as I got back to LA, I knew I was making a mistake leaving her behind. In a fit of romance, I hopped on a plane and flew right back to be with her. I just couldn't help it. The lyrics for "Not Afraid of The Knife" were written on that plane ride back. We were both nervous and anxious as Hell because even though we wanted to be together, it still seemed like a crazy thing to do and we really didn't know what to expect. Anyway, turns out, it was the right thing to do. We are happily married to this day and she means the world to me."

Posted by Matt Horowitz at 1:10 PM