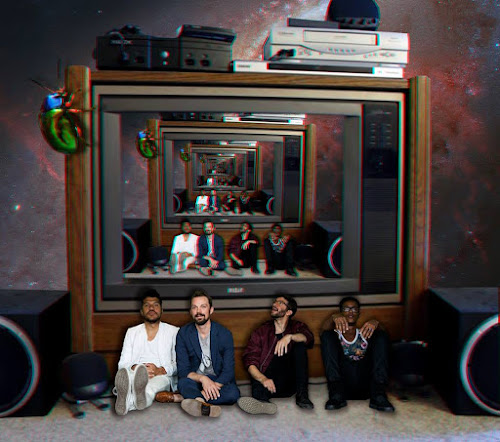 "Leading with dream-like panpipes floating over TEACHERS' signature Tribal percussion; "Mannequin In Heat" is a breezy cut that will transport the listener to warmer climates. Speaking on the track, experimental and innovative lead singer Ben Bronfman says: "This is one of those tunes that wrote itself, sometimes you struggle to find the right melody, sometimes it just comes through you and all you have to do is get out of the way. "Mannequin In Heat" is one of those tunes, just step aside and let it be. We got some Caribbean vibes mixed with Afro-polyrhythmic Pop that stays true to our leftist/Punky swagger! We do it for the love!"

"'[Ben] Bronfman first collaborated with [Kanye] West in 2010, when he flew out to Hawaii to work on My Beautiful Dark Twisted Fantasy. (You can hear a mangled sample of his voice weaving in and out of the mix on "MONSTER," plus a keyboard melody he contributed). This time, he says, West didn't give him much direction. "He kept saying, 'just make it hot, make it really dope,'" recalls Bronfman," Rolling Stone wrote within an October 2014 profile; staff writer Simon Vozick-Levinson is referring to Bronfman's band, TEACHERS' skeletal "New Slaves" demo, "©O1DW1N†3®∞," an early song sketch hand-crafted for Yeezus, which they premiered within said profile. TEACHERS have been a loosely-formed band/production collective that's sporadically released nearly an entire album's-worth of material over the course of the past seven years, staring with 2010's Eli Bush-assisted "GOLD." Then, around 2011, on the heels of Kanye's impeccable Dark Twisted Fantasy, TEACHERS quietly released RMX1-5 of "MONSTER," which were soon compiled within their IPO // Album (Initial Public Offering) Green Owl Records mixtape. Next was their first Bruno Ilgoti-directed "CRØSSED OUT" music video, as well as "Wicked Witch," "GOLD" JOANN REMIX, and "Detroit Falls" scattered throughout 2013, and a number of additional compositions rolled out over the years.


Just as recently a November 15th, Ben Bronfman and band mates Scottie Redix, Steve Borth II & Matthew Kranz unleashed a 13-track "collection of the music inspiring [them] right now" to TEACHERS' Soundcloud page, which includes the likes of shlohmo, Tycho, GOAT, Pretty Lights, Slightly Stoopid, Blood Orange, KAYTRANADA's "Cranes In The Sky" Solange Remix, Flume's Gravez x Ta-ku Re-remix, Four Tet, Cut Copy, SBTRKT, and Tycho's SPOON "Inside Out" Remix. "As TEACHERS, the group offers us “Mannequin In Heat,” a throwback track fueled by those memories of back-in-the-day, imbued by a high-level of Funk that is sure to get your feet tapping from left-to-right; the first single from TEACHERS’ debut effort, Ocean, we’re extremely ecstatic at seeing this group getting off the ground. This follow-up to [their] previous effort is totally worth pressing play on," okayplayer scribe KEVITO wrote within a recent "Mannequin In Heat"-premiering piece. It seems as though TEACHERS' long-awaited Green Owl Records debut, Ocean, is seemingly in-the-works and finally nearing completion, but until then, "Mannequin In Heat" and its predecessor, "Ocean" are currently available to purchase from a number of online digital platforms.

Posted by Matt Horowitz at 8:20 PM