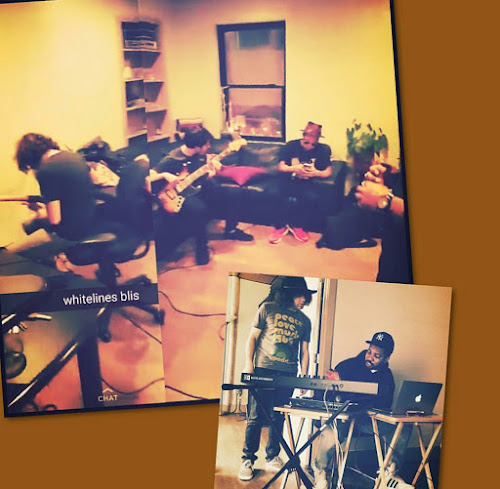 "Me, Dan [Edinberg] (from The Stepkids), and Chuck [Inglish] got together and made the instrumental. Me and Chuck were got connected 'cause we were already working... on the Kali Uchis album. Dan was visiting me in LA; so, we got together and made the beat. We were really interested in combining elements... that haven't been combined before. It was the Summertime, so we were feeling a certain way. We hypothesized on what it would sound like to... combine South American [Bachata] music with Trap. Needles to say, when we started making the music, we all got super excited at this new sound... After that, Trinidad Jame$ came in and set the tone for lyrics and melody," producer, guitarist, and song-writer @JeffGitelman wrote within a Twitter-sent statement; "WunderLAnd," the aforementioned track, was released roughly 10 days ago, following Chuck Inglish's instrumental project Texturizer and Blended Babies-produced Ev Zepplin. "The song was ready. The beat, I had the beat in my head for like two years. And it wasn’t until I linked up with The Stepkids, 'cause that’s who I produced the song with–it wasn’t until I linked up with them that I could execute that idea correctly 'cause I’m not the most skilled guitar player and I believe Jeff [Gitelman] is one of the best on this planet. And I felt like with me and him, we got a lot of similar background in what we listen to and what we came up with," Chuck Inglish said within a recent 10/21 Mass Appeal interview.


"So, we’re fusing these two styles together. That type with a more Urban drum sequence. I actually stumbled upon that fusion in a bar in Texas one time somebody was playing; a lot of Spanish music with a new updated Trap beat, like a Future song. I just thought that was the most, that was like the illest sh*t I ever heard, so I wanted to make it! So, I was inspired by something that was off-grid and I wanted to make my own version of it. So, I used that influence to create that soundscape and then, Trinidad came and just gave that. We created that. We all created it at the same time though," Inglish continued. It appears as though "WunderLAnd" may well be Chuck Inglish's last solo outing for quite a while, as after years of relentless fan outcries, he has finally decided to re-form The Cool Kids with his old partner-in-crime, Sir Michael of The Rocks (Mikey Rocks); "We really felt like we hadn't really finished what we started. They took our styles and ran off. [We're] coming back for it all," read a July Subvert Agency press release simply titled "The Cool Kids Are Back." They've since unleashed a quick-strike teaser single, "Running Man" produced by Chuck Inglish & Detroit City, which features Maxo Kream. Jeff Gitelman has recently recorded and performed alongside the likes of Brandy, Karmin, Mac Miller, Kid Ink, Rejjie Snow, Dej Loaf, Terrace Martin, Duckworth, A$AP Ferg, and Outasight, as well as receiving a BMI Songwriter Award for his work on J. Cole's 2014 Forrest Hills Drive. He's currently putting the finishing touches on a solo EP called Hello Gitty, which is expected to be released early next year.
Posted by Matt Horowitz at 8:05 AM