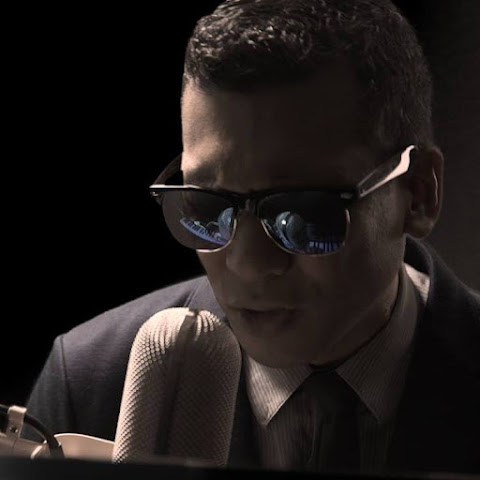 "One of the running themes [throughout] Eddie Romero can be heard in the opening and closing tracks of the album, when I rhyme: "shall I croon or shall I spit?" Basically, I wanted to play with the image of an old school crooner, "a slow jam king," that all of a sudden flips his ballad on its ear and starts rhyming all fast and frenetic. On the first single, "Up to You" this idea is in full effect; to me, I feel like the melody is really sweet and romantic, but I wanted to contrast this with a fast and somewhat hectic beat that hits hard and could be equally at home with Big Daddy Kane rhyming over it."

New York-based trumpet player, multi-instrumentalist, vocalist, producer, rapper, and film-maker Steven E. Mallorca's Sulu & Excelsior Facebook page self-describes his music as "Johnny Mathis meets Mos Def meets Stevie Wonder meets Nat King Cole;" a long-time member and driving force behind genre-blending Hiphopfunkpunkmamboska group P.I.C. since 2000, Mallorca has finally decided to branch of onto his own unique solo venture dubbed Sulu & Excelsior, which has been further described by Steve Mallorca as a quasi-name for his live backing band, a homage to 1950-60's old school Doo-Wop & Soul group names, as well as a thinly-veiled Captain Sulu-Excelsior (Star Trek) reference. "Building on the genre-bending Hip-Hop of his work with P.I.C. Mallorca takes Sulu & Excelsior further into hyphenated musical territory, as he plays all the instruments and vocal performances with nods to influences that span 1940's and 50's crooning, 60's and 70's Soul, and 80's and 90's Hip-Hop... Mallorca was in the process of writing songs for a new film project, when he decided to develop them further, and this collection of tunes eventually became Sulu & Excelsior's debut album, Eddie Romero," Steven E. Mallorca wrote within his on-site Bandcamp description of his latest project.


Eddie Romero's 14 contained tracks were entirely "produced, arranged, composed, and performed by Steven E. Mallorca; all vocals and instruments performed by Steven E. Mallorca," reads Eddie Romero's Bandcamp liner notes. I think the best way I could possibly attempt to describe Sulu & Excelsior's approach is by describing his Flea Market Funk-debuted "Up to You" as an utterly infectious Neo-Soul/Funk banger, which I would likely compare to what an imagined Stones Throw emcee-assisted Mayer Hawthorne Hip-Hop album might sound like. Steve Mallorca's debut as Sulu & Excelsior, Eddie Romero, is currently available for $7.00 (or more) from his personal Bandcamp page; while "Up to You," the first of roughly seven planned music videos from an accompanying "visual album," was premiered over at Flea Market Funk just the other day. "'Up to You" has Sulu crooning over serious upbeat Soul drums with haunting organ behind and a driving bassline that will no doubt get them dancing. Harmonies all around, Sulu has some influences near and dear to him, and when he drops the mic to spit a rhyme, you see the extent of his musical abilities. The horn stabs are killer too, Mr. Sulu plays the Hell of that trumpet, as well. This is definitely a fresh, genre-bending long-player no doubt," Flea Market Funk founder DJ Prestige exuberantly wrote this past Monday.

Posted by Matt Horowitz at 6:23 AM