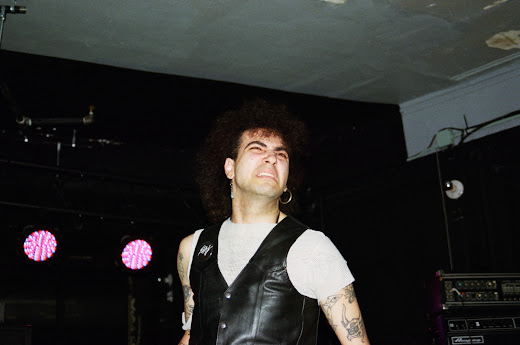 "Nader Habibi is a frizzy-haired and heavily tattooed Lebanese-American from Yonkers, New York. He has a fondness for mesh tank tops, large earrings, and raging Hardcore Punk. Two days after improvised bomb attacks left New York City tense and frightened, HARAM have dropped the follow-up to their well-received 2015 DEMO," Noisey scribe Tim Scott wrote within a September 20th-published HOLY SH*T profile. Scott's of course, referring to Arab-American Punks HARAM's latest quick-strike Emil Bognar-Nasdor recorded EP, شو بتشوف؟ "What Do You See​?​" which is noticeably influenced by Aggro-Rap "darlings" Death Grips, Japanese Hardcore, and Toxic State Records' acclaimed Ground Zero NYC 2013​ comp. While I can't exactly decipher much of frontman Nadir Habibi/Haram's blood-curdling, often bellowed Arabic lyrics (aside from English translated titles), the sentiment first echoed by The Misfits & Black Flag all the way through Rancid & Against Me! is very clearly heard throughout; with a mere eight songs released to Bandcamp clocking in at just under 20 minutes and little of an online presence, full band images—or even last names for Mike, Martin & James [Stuart]—there are, however, a number of characteristically grainy, lo-fi, and perfectly sweaty live-filmed reels of digitized footage from venues like Williamsburg Brooklyn's own The Acheron's annual New York's Alright show. HARAM's شو بتشوف؟ "What Do You See​?​" EP was released back in mid-September and is currently sold out on 7-inch from both Toxic State & Sorry State Records, although, it's still available for $3 or more at their Bandcamp page along with its self-explanatory predecessor, DEMO. I just wanna take a second to send a quick shout-out to Ben at Black Metal & Brews, who writes about... you guessed it: Black Metal paired with craft beer selections, for turning me onto HARAM just this past weekend!

Posted by Matt Horowitz at 6:49 AM