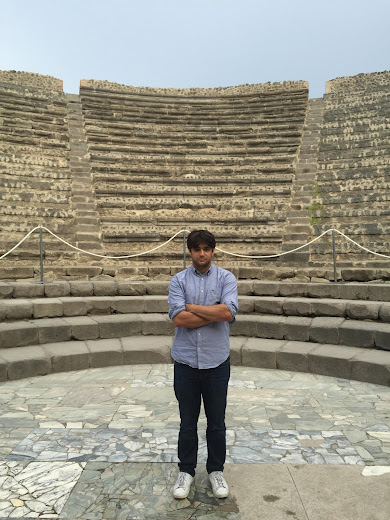 "After repeatedly being visited by a strange messenger in his dreams while on tour in the islands of Greece, Toby Pazner became consumed with a vision to tell the stories of The Olympians through music. Chosen by the gods as a messenger for not only his musical gifts, but for his unique position at the center of the Daptone family, Toby built a home studio from scratch and employed some of the top Soul musicians in the world to help him breath life into this album," reads a fragmented chunk of The Olympians' on-site Bandcamp press release. Tobias "Toby" Pazner's musical journey with the Daptone/Truth & Soul/Big Crown Records-affiliated family dates back as far as 2005 and his piano-vibraphone credits include records by Lee Fields & The Expressions, Lady, El Michels Affair, Lady Wray, Sharon Jones & The Dap-Kings, Menahan Street Band, Aloe Blacc, Bronx River Parkway & Candela All-Stars, Ultimate Breaks & Beats, and The Bushwick Philharmonic. Toby Pazner then assembled a revitalized version of his short-lived 2008-09 solo project, The Olympians "featuring the talents of Thomas Brenneck (Menahan Street Band, Budos Band, Charles Bradley), Dave Guy (Tonight Show Band, The Dap-Kings) Leon Michels (The Arcs, Lee Fields), Nicholas Movshon, Homer Steinweiss (The Dap-Kings), Michael Leonhart, Neal Sugarman (The Dap-Kings), and Evan Pazner (Lee Fields)." It's been about a month in-the-works and now, upon the recent release of their bohemoth of a self-titled Daptone Records debut, I'm proud to present my interview with The Olympians' keyboardist, percissionist, and general mastermind, Toby Pazner; sit back, read through our intervew, and enjoy the Ancient Greece-evoking instrumental magic of The Olympians!

I. How did you go about hand-picking and assembling your band for The Olympians self-titled Daptone debut? What role does each member play in the band?

I grew up with several of the members of the band. The other members, I have met through my years of playing music in NYC. Each musician brought [their] role in different ways. Primarily, the horn players helped craft the melody and the rhythm section helped shape the chords to the compositions. However, they all influenced each other, as the tracks were recorded. We’ve all been playing music together for many years in one band or another, so we know how to work together to create something new and distinct.


II. How does this iteration of The Olympians differ from its 2008-09 incarnation that previously released two Truth & Soul 45’s?

The main difference was the recording technique. Many of the same musicians play on the album and the 45's. However, recording equipment changed significantly; I upgraded from a 1/4 Tascam-388 to a 1-inch Tascam MS-16. A lot of the mics and gear that was used to record the album were not available to me when we recorded the 45's. I also had more tracks to work with, so I could make the sound bigger more [comfortably].


III. “After playing the famous Acoropolis in Athens and swimming in the Agean Sea, Pazner dreamed he was visited by a toga-clad, curly-haired figure who told him to travel across the great sea to his home and build a “Temple of Sound;’” how did these dreams help influence the writing, recording processes, and overall narratives of The Olympians?

It really served as a beacon; a point to move towards. It helped coalesce the album around a certain theme and push it towards its completion as a singular album of songs with a mind set, not merely a collection of random instrumentals.


IV. What was a typical recording session for your Olympians LP like, let’s say, for example, “Sirens of Jupiter?” Was it especially challenging with everyone’s rather hectic schedules?

Well, generally, we’d start with myself and the drummer. Sometimes a bassist, as well. I would have an idea for a song then we would work it out. I or the bass player would come in and track the bassline. I would [then] bring the reel over to Dunham or Diamond Mine Records and Thomas Brenneck would lay down some guitar. The horn players would come over and put the melody down. Last, I would add strings, harp, and any other auxiliary instruments. All along, I would be recording and re-recording keyboard parts.


V. How did you ultimately decide on the (quite clever) band and project name, The Olympians... any correlation to Paschalis Arvanitidis-helmed The Olympians from Thessaloniki, Greece active from roughly 1965-71?

It actually was the idea of my friend and drummer Homer Steinweiss. It was originally named in 2008 while the Beijing Olympics were taking place.


VI. “Pazner shared the fruit of his long venture with his long-time friends and co-owners of Daptone Records Gabriel Roth & Neal Sugarman, who jumped at the opportunity to release it,” reads tour recent press release. Exactly what type of roles and overall influence did Neal & Gabriel play within The Olympians’ creation?

Gabe was actually the one who approached me about releasing it on Daptone and mixing it. I went out to California to his studio there and we spent 10 days mixing it. Was a lot of fun! I’ve known both Gabe & Neal for years. They are responsible in a lot of ways for the development of Soul music out of New York for the past two decades. Daptone is a quality label that has brought Soul music back into the fold for a new generation of listeners.


VII. What might you likely cite as some of your greatest sources of inspiration and influence on The Olympians’ Daptone debut—outside of inspiration drawn from your fellow band mates?

There are several influences; everyone from The Beatles, Al Green, Curtis Mayfield, Bill Withers, and Marvin Gaye, to Ramsey Lewis, Miles Davis, and Horace Silver.


VIII. How do you think your years of experience playing with Sharon Jones & The Dap-Kings, Lee Fields & The Expressions, El Michels Affair, Aloe Blacc, and Lady, just to name a few, has played into dictating the overall sound and vibe harnessed within your long-awaited “solo” debut, The Olympians?

I’ve spent a lot of time learning about making albums by sitting in on writing sessions and recording sessions; sitting there and watching the great producers for these albums work and craft the sound has been a huge influence on the making of my own album. Also, listening to music I love and studying [it] has allowed me to find my own sound.


IX. Following The Olympians wide release this upcoming Friday, October 28th, what do you currently have planned next… any immediate plans for any more 7-inch singles, proper music videos, and Olympians “All-Stars” tour, etc?

The plan is to put something together with a singer for the next album. Instrumental music is great and a lot of fun to make, but working with lyrics and a vocalist brings a more personal touch to an album and makes it so much easier to reach people and have your listeners relate to the songs you’ve written.


X. Now, since we’re a primarily Hip-Hop-centric publication here at The Witzard with one foot firmly planted in Punk/Indie Rock and another in Soul-Funk… do you currently have any vaulted tracks recorded with sharp-tongued emcees awaiting release? And if not, who would you ideally, like to work with?

I feel a lot of the tracks on this album could be sampled pretty easily. [I] would love to have someone like Q-Tip work over one of the tracks. One of the great things about Hip-Hop is its ability to take an existing work and change it into something different by building upon what's already there. I would love to see an emcee take a shot at these songs!