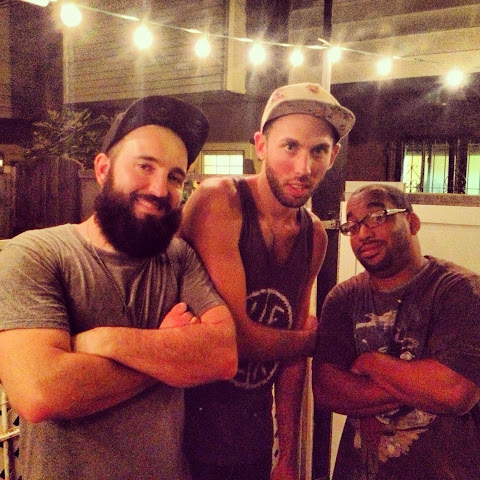 "I was re-watching old Mad Men episodes and I heard Don Draper say "we're the creatives—just the least important most important thing there is." And I immediately went into the studio and freestyled the first verse over that beat 'cause I was so inspired by that line... to give you more insight, I'm not a freestyle type of recording artist; usually, all of my stuff is written, then re-written, then edited, and then finalized when I record it. I picked out that beat from Small [Professor] is his apartment during a snow storm. He pitched it first to a very [well-known] rapper, who passed on it, and I snatched it up immediately," South Philly-based emcee and @RapBooklets curator Zilla Rocca wrote within a recent emailed conversation. Rocca and the self-proclaimed "smallest professor that you've seen thus far" have been friends and collaborators since 2008 and South Philly neighbors for the past 4-5 years; they're previously released a scattered discography of collaborative music released on Gigantic Vol. 0-1, Major Crimes EP, Wu-Tang Pulp, Nights & Weekends EP, Bring Me The Remix of Zilla Rocca, Party with Villains EP, Broken Clocks EP, Weak Stomach EP, and Bad Weather Classic EP—all uniformly collected and compiled on Career Crooks' recent pre-album mixtape compilation, Sin Will Find You: The Collected Works.


Career Crooks plan to release their proper full-length "debut," (amazingly titled) Good Luck with That will see a tentative release early next year; but until then, Zilla Rocca & Small Professor have unleashed their first official single as Career Crooks, "Least Important Most Important," which was very recently premiered over at TINY MIX TAPES. It's a rather aggressive, yet oddly charming, lament centered around Zilla Rocca & Small Professor's collective 8-year hustle in-and-out of the industry. Zilla immediately dedicates "Least Important Most Important" to "all my freelancers, contracted employees, and part-timers working 38 hours... no one wants to give 'em no G*ddamn money and exploit all your talent." Zilla Rocca & Small Professor's career-spanning Sin Will Find You: The Collected Works is currently available at a Name-Your-Price rate at Wrecking Crew's Bandcamp page and keep an eye out for Good Luck with That, as well as a companion The Witzard interview, early next year. I've already suggested recruiting fellow Philly natives Darko The Super and ?uestlove, as well as Small Professor's Highway Robbery EP collaborator Guilty Simpson... and let's make a dope inner-CD booklet, so Good Luck with That can be featured on @RapBooklets, fellas!