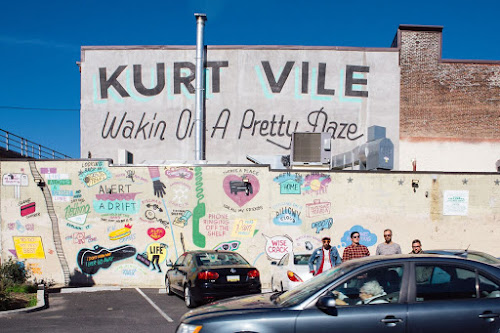 "'The Bar Is Low," which, according to [Matt] Korvette, is "about how every guy seems to be revealing themselves as a sh*thead. It seems like every guy is getting outed, across every board of entertainment and politics and music. There’s no guy that isn’t a total creep,'" reads a fragmented chunk of Sub Pop's latest WHY LOVE NOW-announcing Pissed Jeans press release; "WHY LOVE NOW picks at the bursting seams that are barely holding 21st-century life together," describes Sub Pop's press release, which additionally refers to "The Bar Is Low" as a "grinding rave-up." It can only be assumed that Korvette is likely referring to one-time men of power and current American disgrace stories like Bill Cosby, Swans frontman Michael Gira, fallen Indie Rock PR heavyweight Heathcliff Berru, and our newly-elected President Trump. Pissed Jeans recruited New York No Wave pioneer Lydia Lunch, who's worked with everyone from Teenage Jesus & The Jerks to one-time Mars Volta frontman Omar Rodríguez-López, to produce WHY LOVE NOW along with fellow home-grown Philly Metal legend Arthur Rizk (Eternal Champion, Goat Semen, Sumerlands). Pissed Jeans fifth album and proper follow-up to their critically-acclaimed Honeys is currently available for pre-order from Sub Pop's on-site Mega-Mart ahead of its soon impending February 24th release; steadfast fans will receive WHY LOVE NOW as part of Sub Pop's Loser Edition lavender-colored vinyl package, as well as pre-release downloads of any and all advanced tracks and exclusive access to stream the full 12-track album one month prior to its release day.


"Pissed Jeans have been making gnarly noise for 13 years, and on their fifth album, WHY LOVE NOW the male-fronted quartet is taking aim at the mundane discomforts of modern life—from fetish webcams to office-supply deliveries. “Rock bands can retreat to the safety of what Rock bands usually sing about. So, 60 years from now, when no one has a telephone, bands will be writing songs like, 'I’m waiting for her to call me on my telephone.' Kids are going to be like, 'Grandpa, tell me, what was that?' I’d rather not shy away from talking about The Internet or interactions in 2016,” says frontman Matt Korvette... The lyrics on WHY LOVE NOW are particularly pointed about gender relations and the minefield they present in 2016... As they did on their last album, 2013’s Honeys, Pissed Jeans offer a couple of “f*ck that sh*t type songs” about the working world."