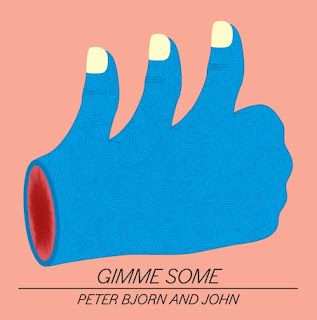 Peter Bjorn and John's new album, Gimme Some, will be released on March 29 in the US through label imprint, StarTime International. "Breaker Breaker" is the first taste of the 11-track collection.
In an EXCLUSIVE interview with SPIN's Will Goodman, [leadsinger] Peter Moren broke down the song's meaning: "It's a lightning-bolt pop-punk jam with gritty guitars, fuzz-bomb bass, and a rising melody with interlocked vocals and synths. "That's one of John's songs," says Moren. "He told me it was about a journalist that he hates [laughs]." Lines like, "I don't even know you / But your words just cut me like a knife," says Moren, are "basically about people with a lot of prejudice against certain ideas... John was angry at something he read. Maybe it was a bad album review!" The song, Moren adds, will be particularly fun to play live. "It's this short, power-pop jam. It's all about the energy."
Check out the rest of the "Album Sampler Break-Down" over @ SPIN.com, and head over to the band's Official Site to grab up a "Breaker Breaker" download for the cost of an email address.
Posted by Matt Horowitz at 8:57 AM