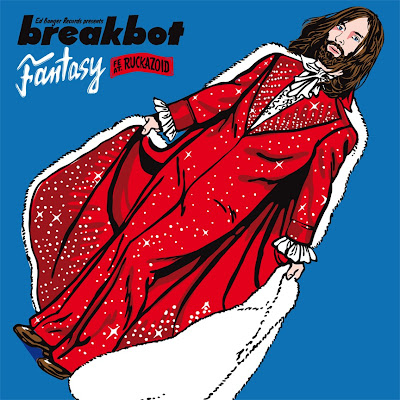 Breakbot's "Fantasy" video essentially makes use of the "Reverse Weird Science" plot device; Instead of boy(s) create dream girl... Proceed to PARTY, fall in love, get in trouble, etc. etc. - "Fantasy" goes a little something like this: Boy meets/draws girl, proceeds to dream about getting with her and in turn, falls asleep in class. Gary and Wyatt from Weird Science (1985) make out with "Lisa" [fake girl], in real life, while the protagonist in "Fantasy" has a make out sesh with a real girl... in his dream sequence, that is. For the most part, the similarities end there.
"Breakbot" is actually the alias of French DJ/producer, Thibaut Berland, who was about 4 @ the time of John Hughes' above-stated release. Berland [additionally, a film maker/video director] even makes a cameo appearance in "Fantasy" - short shorts, Hanes T-shirt, tube socks and all!.. His brief discography was kick-started with Happy Rabbit EP for Moshi Moshi (2007). Breakbot has since signed to Ed Banger Records; Releasing the moderately-successful single, "Baby, I'm Yours" [-feat. Irfane], as well as giving/receiving various remixes. Berland has had the pleasure of remixing the compositions of Popular artists like: Justice, Digitalism, Air, Röyksopp, Jamaica, The Rakes, Fatlip, and Pnau. Thus far, there are no signs pointing towards the immediate release of a full-length [solo] album.