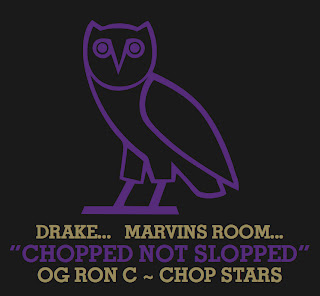 "Marvin's Room" is 1 of 2-3 recently-liberated promotional/teaser singles for Take Care (Oct. 24). A slow build up to the Fall 2011 release date, an "official single(s)" will soon be released in July. Album #2 is rumored to feature appearances from The Weeknd, Florence [+ The Machine], Lil' Wayne, 8Ball & MJG, T-Pain... as well as production from the likes of Jamie xx, Q-Tip, 9th Wonder, DJ Premier, and Noah "40" Shebib.
While Popular artists like JoJo, Chris Brown, and Teyana Taylor have remixed [covered] "Marvin's Room," Drake let loose the official music video/Screwed Remix earlier this morning. Debuted by Oliver over @ October's Very Own, the video is essentially a literal, word-for-word assembly of "Marvin's Room." Activities include: drinking, PARTYING, speaking of/interacting with "bitches," and drunk dialing... The track is edited [short] and wobbles out, along with Drake's consciousness.

Posted by Matt Horowitz at 7:59 AM