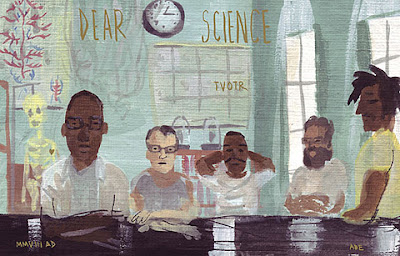 For the latest installment of Pitfork's [semi-frequent] Director's Cut series, staff writer Ryan Dombal got a chance to sit down/chat with Barney Clay (Gnarls Barkley, Yeah Yeah Yeahs). For all intensive purposes, Clay's most recent effort is the case in point here: TV on the Radio - "You." Essentially Track #3, in a track-by-track visual re-creation of Nine Types of Light (album). Each portion then strung together into one cohesive 60-minute "story" with candid interview segments. In my personal opinion, "You" is damn-near one of the strongest tracks on the album, both audio/visually. The crux of the Barney Clay-helmed video features Tunde as a washed up [Artist Formerly Known as] Prince-like character.

Dombal/Clay's recent convo touches on nearly all of the most interesting aspects of said music video... Here's a short excerpt to whet your appetite(s): "[There's] one scene where this girl comes in, spots the band, and is like, "Hey, you're The Roots!" Well, what I've learned from this shoot is that Tunde dressed as Prince looks like Rick James. Everyone was like, "Hey, it's Rick James!" It's like, "No, it's Prince!" - That's kind of a sad commentary on Rick James..." Peep the complete Director's Cut interview and "You" music video over @ Pitchfork.

Posted by Matt Horowitz at 3:50 PM