10 Years of Rap As Journalism: sole - "Dispatches from The American Fall" 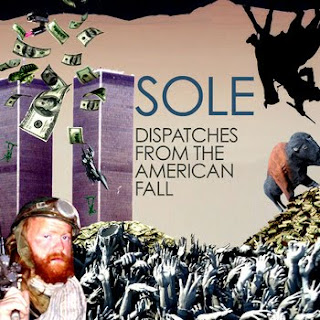 While I'll be the first to admit that I'm far from being labeled "politically active" and/or "politically conscious," I harvest a great deal of respect for people who are passionate about political issues. My friend and fellow [Pseudo-]Music Journalist-rapper, Tim Holland (sole) on the other hand, delivers passionate, lyrically-driven rapped tales; In essence, re-telling the gradual downfall of the nation. More often that not, sole somehow manages to convey these urgent messages in a slightly playful, yet genuine manner. All the while, always coming off fairly information-driven, thought-provoking, and never too "preachy."
This most recent effort, Dispatches from The American Fall... is more of a compilation album than a proper mixtape - As it spans the bulk of sole's 10-year career, highlighting some of the more crucial issues. Aside from a batch of newly remixed tracks and "I Think I'm Ben Bernanke," the remaining 18-20 tracks were hand selected from sole's previously released mix CD's: Songs That Went Tin, Live from Rome (2005), Mansbestfriend: POLYSCI187 (2006), Desert Eagle, "Habitat" (2007), Sole & The Skyrider Band Remix Album (2008), Nuclear Winter Vol. 1 (2009), Pyre Audiobook, Mansbestfriend 5 (2010), Hello Cruel World, and Nuclear Winter Vol. 2 (2011). Moral of the story: sole is basically THE SHIT! Holland's most definitely a very well-rounded, intelligent performer; An American citizen from whom we could all truly learn a thing or 2!

Posted by Matt Horowitz at 3:27 PM