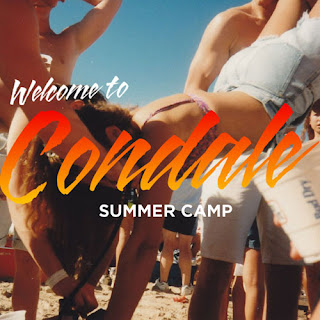 Initially formed for nothing more than shits, giggles, and friends' sheer enjoyment, Summer Camp has morphed into quite a prosperous passion project band. Active on the Indie Rock scene since Fall 2009, Summer Camp was erroneously mistaken for "a group of seven Swedish friends, who made timeless, doe-eyed Lo-Fi Pop." [Music Journalist] Elizabeth Sankey & Jeremy Warmsley's debut long-player as "Summer Camp," Welcome to Condale, will see a Nov. 8th release; Like the majority of the group's compositions, the album's central story is set in the fictitious quaint, little suburb of Condale, LA.


Welcome to Condale is the eventual follow-up to Summer Camp's 2010 release, Young EP. Thusfar, a string of sample tracks have been release from the record: "I Want You," "Better Off Without You," and now... "Down." The Chris Boyle-directed music video accompaniment for the latter was released just the other day. It's a Halloween-themed piece, essentially created by melding 50 .gifs [moving pictures] together into one continuous, back-to-back sequence. For those potential new-found fans who are still a bit weary, head on over Prefix - They're now hosting a full 12-track stream of Welcome to Condale (Moshi Moshi). Another web domain of note should be Summer Camp's Blogspot: Simple, band-run photo-blog that regularly posts dated candid photos of unknown origins.
Posted by Matt Horowitz at 5:16 PM